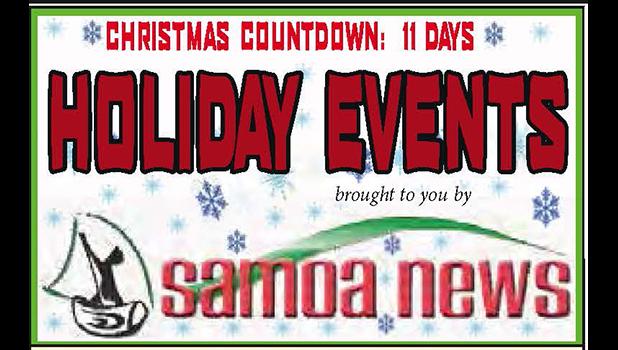 Ten years ago this week the Forsgren Family fulfilled their dream of opening an American Fast Food Franchise, a major investment that brought to American Samoa’s shores the Carl's Jr. franchise.

Along the way they added the Green Burrito, a Mexican food offering that we all love and today Carl’s Jr. in American Samoa is their largest volume outlet in the United States because of you their loyal customers.

One of their biggest accomplishments so far has been being able to incorporate local produce into their burgers and salads according to Carl’s Jr. CEO Barry Forsgren.

In 2018, Carl's Junior will be expanding the restaurant adding a children's play area with additional seating. Included in the bigger Carl’s Jr. will be a kids’ party play area, which will include a kids’ play gym with a party/ conference room. This new children's area will be separate yet a part of the main restaurant so parents and guardians can eat and watch their children enjoying themselves in a secure area.

To celebrate its 10th Anniversary Carl’s Jr. is offering some great food bundles at… you guessed it — $10.

These Bundles include the Shake, Criss Cut fries and Super Star Burger for $10; 2 Spicy Chicken & a cheeseburger with drink and Fries for $10; and, Chili Cheese Fries, Chili Hot Dog, Chili Hamburger & a Drink for $10.

4” Juniors are a little smaller than their other burgers with the same great taste and value; and  yup — there’s a $10 bundle of 2 Junior Double Cheese Burgers, 1 Junior Classic Burger, a hotdog with Onion rings and a drink.

Carl’s Jr. is also offering other deals to reward customers for their loyalty along with the Kids eat FREE promotion that is back by popular demand.

With the purchase of any adult combo, one cool kids combo is offered per child for FREE.

This offer is good until December 17th.

For all our local health conscious customers, Carl’s Jr. wide selection of salads and of course the famous low- carb burger is available daily our menu. Something for everyone at Carl’s Jr.

Carl’s Jr. would like to thank you American Samoa for all your goodwill, and is looking forward to serving you in the years ahead.

Merry Christmas and a Happy & Prosperous New Year to one and all.

Mr. Anders Forsgren and Mrs. Leone Forsgren, President and Vice President of Forsgren Foods Inc. who own the Carl’s Junior Franchise are all smiles here along with some of the 55 Carl’ s Jr. employees and the delectable anniversary cake that featured an edible hamburger made of cake, during their 10th anniversary celebrations yesterday at the Carl’s Jr. Restaurant in Nu’uuli. [Photo: THA]