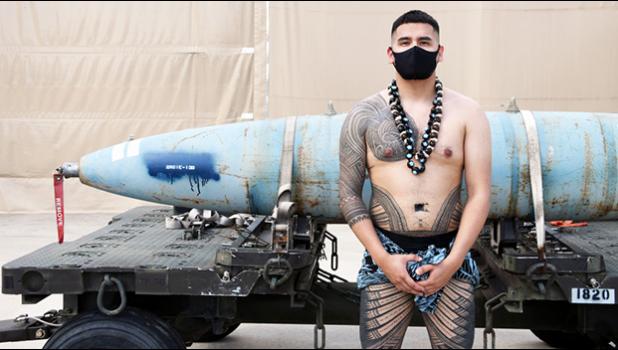 Joint Base Andrews, MD —  Airman 1st Class Carlos León, a munitions systems technician with the 113th Wing, D.C. Air National Guard, is of mixed race heritage. Born and raised in Fredericksburg, Virginia, to a Peruvian father and a half Nicaraguan and half Samoan mother, he always felt connected to his Hispanic heritage. He speaks fluent Spanish and grew up around Latino culture. But there was always a part of him that wanted to learn more about his Pacific Islander roots.

Since the start of the COVID-19 pandemic, the Asian American Pacific Islander community has been in the spotlight. According to the Stop AAPI Hate National Report, there were almost 3,800 hate incidents reported since March 2020.

At the beginning of the pandemic, León sat down to watch the movie “Moana” with his mom, the first Disney movie to depict Pacific Islander heritage. During the movie, his mom pointed out that Moana’s father had a pe’a, a traditional Samoan body decoration, which is something her father also had.

“My mom said ‘your grandpa had something like that. Your grandpa was Samoan. He came over from the States during the Contras war in Nicaragua and ended up staying,’” said León.

When he asked why he had never known about his grandfather’s pe’a, his mom replied “we grew up Latino.” It dawned on him that growing up, his family spoke Spanish but sprinkled in some Samoan words that the rest of his Latino family didn’t use. But it was seeing his Samoan heritage depicted in a movie that lit the fire inside him to connect to his ancestors.

“That immediately sparked an interest in me. I always thought it was so cool, the tattoos that Samoans, Maori, Fijian and Hawaiian people have. To find out that I actually had a connection to it was surprising. Immediately I just wanted to jump straight in, head first,” he said.

For many young men of Samoan descent, getting a pe’a is a rite of passage that signifies the transition from boyhood to manhood. The pe’a, or malofie, is a traditional Samoan tatau, or tattoo, that covers the body from the waist to the knees. It is a grueling and painful process done by hand by a tattoo master, or tufuga, by hammering the ink into the skin with pieces of bone, turtle shell or wood. It is also believed that the English word for tattoo originated from the Samoan word tatau.

The tufuga, named Sulu’ape Si’i Liufau, who did León’s pe’a is based in California. It took León almost a month to complete his pe’a, which spanned the course of 10 sessions, each lasting 5-6 hours with the final session lasting 10 hours. León explained that when young men receive the pe’a it signifies servitude to your people, to your tribe or to the people you surround yourself with.

“One of the main reasons why I wanted to get [the pe’a], besides the fact that it connects me to my ancestors and my grandpa, [is] because it signifies being in service to your people. Now that I have it, I have to live with integrity; I have to live a certain way,” said León.

“So for me that kind of connects me to our [Air Force] core values: integrity first, service before self [and excellence in all we do.] That just added to the connection for me; it added more meaning to it besides the Samoan side. This also has meaning to me, [being] a part of the Air Force,” he said.

When León approached his leadership about getting the pe’a and reconnecting with his Samoan heritage, they were very understanding. He approached his chief who sprang into action to make sure León was able to go on this journey.

“My chief understood that it was a cultural thing and there was a lot behind it, [that] it’s not just a tattoo. He did everything he could to try and help me out with making sure I had the leave for it and making sure that I’ll be ok when I am gone,” said León.

When León came back, his leadership was just as accommodating. The tattoo was still fresh and very painful, so he was allowed to wear a modified uniform, including his lava lava, the traditional dress of Pacific Islanders worn around the lower half of the body like a wraparound skirt. Sun poisoning is also a risk when getting the pe’a, and the tattoo needs to be kept covered and out of the sun. His leadership allowed him to switch from the day shift to the night shift so he could still carry out his mission during the healing process.

Now that León has the pe’a he feels more responsibility toward the Samoan culture and to be a good steward of the tattoo. He continues to reconnect with his Samoan culture by learning the language. His hope for the future is to become a coso, an apprentice to a tufuga that helps stretch the skin and prepare it for the tattoo, in the hopes that one day he can become a tufuga himself.

“When I was there for the whole month it was just an incredible experience. Being around so many [Samoan] people, even though they had just met me, they said if you’re a quarter Samoan it doesn’t matter. You’re getting this done. You’re full Samoan to us,” said León. “Once you have the pe’a, it’s a different feeling. It’s a different way of life.”