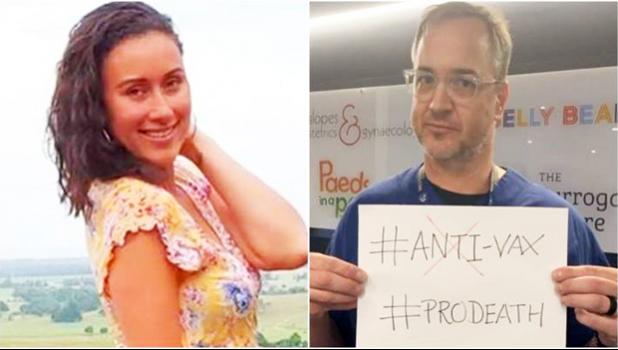 Brisbane, AUSTRALIA — An Australian doctor has blasted a high-profile anti-vaccination advocate for dubbing Samoa "NaziSamoa" for its mandatory vaccine efforts.

Taylor Winterstein, the wife of Australian league player Frank Winterstein, has told those who support inoculations to "wake up". In a post on Instagram, she also claimed parents in Samoa were hiding their children from authorities to avoid receiving mandatory vaccinations.

But Dr Brad Robinson, an OBGYN from Brisbane, said no-one should be listening to her.

"This woman is not a doctor. Not a nurse. Has no medical training. But sells her 'Anti-Vax' message for a fee.

"The science is clear. Unequivocal," he wrote alongside a video of him shaking his head and holding a sign that implied anti-vaxxers were "#ProDeath".

Health professionals previously highlighted the danger of the virus when Winterstein announced a speaking tour of Auckland in March.

On her website she described herself as a "self-educated" person who lived for "holistic health", and regularly hosted anti-vaccination workshops. Winterstein's $2222 programme created with her sister, Stevie, focused on identity, money, motherhood and relationships and was recently criticised by experts. Australian investigative news programme A Current Affair spoke with psychologist Sue Langley, who warned against such programmes.

"Maybe it sounds good, it looks schmick, because there's a meme here and a beautiful photo there, and whatever but there's a lot more science of wellbeing than just those sorts of things.

"I think it's a very easy way to make money if you've already got a following because everyone already thinks you're awesome, but if you genuinely need help, and you genuinely want to improve your wellbeing, there are better ways of doing it and cheaper ways of doing it, that would actually work more effectively," she told the Nine Network programme.