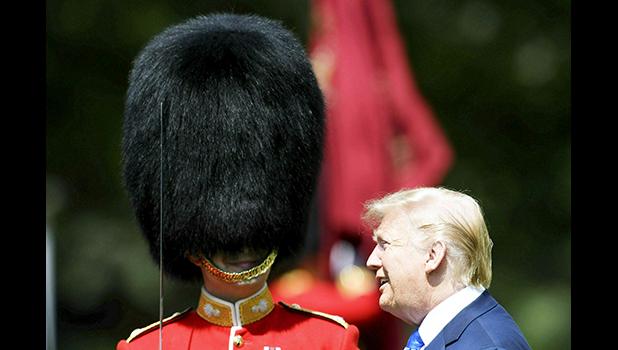 THE FACTS: The sound on the video was manipulated to make it appear that the Grenadier Guards played “The Imperial March” from “Star Wars,” as President Donald Trump inspected the guard during his state visit Monday. The march is the theme song for notorious villain Darth Vader in the films. Footage from the BBC’s broadcast shows the military band played U.S. Army, Navy and Air Force songs during the inspection of troops, which Trump made with Prince Charles. The band, known for their tall bearskin hats and red uniforms, kicked off the pageantry by playing “Wild Blue Yonder,” the official song of the United States Air Force. That was followed by “Anchors Aweigh,” the official march of the U.S. Navy.

THE FACTS: The photo, which circulated on social media around the 75th anniversary of the D-Day landing, is being misrepresented. The photo was taken January 15, 1945, seven months after D-Day, as Red Cross workers stepped from a U.S. Coast Guard-manned barge onto a beach in the Riviera region of France, far south of the Normandy beaches in northern France. The allied invasion in Normandy was June 6, 1944. The women seen in the photo were there to “carry out their duties and keep high the spirits” of fighting men, according to a 2016 American Red Cross story published on their website. The original caption with the photo in Getty’s archive says it shows “Ladies Day” on the Riviera, where Red Cross women arrived on the beach with small packages to help the fighters. The photo can be found on the American Red Cross website and in Getty Images.

THE FACTS: Although there were protests during President Donald Trump’s state visit to Britain, the photo in the post was taken during protests around a Trump visit in 2018. The photo was manipulated to add more blimps and larger posters. Facebook posts Tuesday paired the manipulated 2018 photo with a picture of Trump and a fabricated quote: “Where are the protesters? It’s fake News! All I saw was love.” The original photo, taken July 13, 2018, shows protesters in Trafalgar Square during the president’s trip to London. It was taken by Getty/AFP photographer Niklas Halle’n. The image was altered to include larger anti-Trump signs and three Trump baby blimps, which were fashioned after a real 20-foot-tall blimp that depicts Trump as a screaming baby in diapers. That blimp made its debut during protests last year and flew over crowds at Tuesday’s protest in London’s government district.

CLAIM: Roe v. Wade was only passed because Roe lied about being raped. She admitted it on live TV.

THE FACTS: The U.S. Supreme Court did not consider how “Jane Roe” became pregnant when making its landmark decision in 1973. The caption on a video spreading on social media wrongly suggests that the Supreme Court ruled to legalize abortion because Norma McCorvey, who was known as “Jane Roe” in the lawsuit, claimed to have been raped. Whether or not McCorvey had been raped is not mentioned in the court’s majority or dissenting opinions. And the Supreme Court has not weighed in on restricting or legalizing abortions based on why a woman seeks the procedure, said Mary Ziegler, a law professor at Florida State University who has written extensively about the ruling. The video, which has been shared on social media before, features edited clips of McCorvey talking about her life in a 1987 interview with WUSA-TV. During the interview, she admits to fabricating the rape as she sought an abortion in 1969 because she believed it would help her get access to the procedure. Abortion was illegal in Texas then, except to save a woman’s life. The video recirculated in recent weeks as state legislatures across the country passed new restrictions on abortion procedures.

CLAIM: “If I were to run, I’d run as a Republican. They’re the dumbest group of voters in the country. They believe anything on Fox News. I could lie and they’d still eat it up. I bet my numbers would be terrific.” -- Donald Trump in 1998 People magazine interview.

FALSE: The president did not make such a comment to People magazine. Singer and actress Bette Midler, who often speaks out against Trump, shared the false quote on her Twitter account Sunday. She apologized and deleted the quote after learning it was false. Trump responded with a tweet calling her “a washed up psycho.” Julie Farin, a People magazine spokeswoman, told The Associated Press that the magazine looked into the claim exhaustively when it first surfaced years ago but did not find that the president said anything remotely like it. The quote first began circulating in 2015 and has been widely shared across social media platforms, including Facebook. It has been widely debunked since that time.