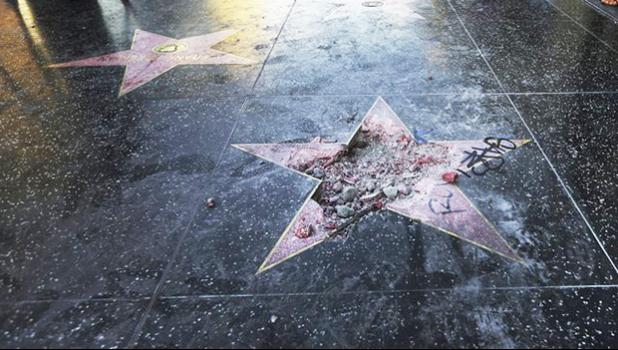 NOT REAL: Liberal Who Destroyed Trump’s Hollywood Star To Be Banned From Voting For Life

THE FACTS: The man arrested for destroying President Donald Trump’s star on the Hollywood Walk of Fame will not lose his right to vote for the rest of his life, as claimed in a report circulating widely online. A story on YourNewsWire says Austin Clay, 24, “has been charged with felony vandalism and is set to be banned from voting for the rest of his life” for demolishing Trump’s star with a pickax. Clay was booked on suspicion of felony vandalism July 25 by the Los Angeles Police Department. Formal charges have not been filed, according to Paul Eakins, the public information officer for the district attorney’s office. But even if he was ultimately charged with felony vandalism, convicted, and given the maximum sentence, California law states he would be eligible to vote once his sentence and any related parole time had been served. In fact, if Clay was convicted and sentenced to serve time in a county jail in California, he would still be able to vote while jailed, in keeping with a bill Gov. Jerry Brown signed into law in 2016. YourNewsWire did not respond to requests for comment.

NOT REAL: Fat tourists are CRIPPLING the donkeys that carry them around the Greek island of Santorini forcing locals to crossbreed them with mules to make them sturdier

THE FACTS: Donkeys are not being bred with mules to create a stronger animal to carry overweight tourists on the steep terrain of the Greek island Santorini, as several online news sites reported this week. Alexandra Dimopoulou, a representative with the Greek-based Panhellenic Animal Welfare and Environmental Federation, said the reports are false. “No, it isn’t truth that Santorini locals are breeding donkeys with mules to accommodate heavier tourists,” she said in an email. Mules, a cross between a male donkey and a female horse, are virtually sterile and not used for breeding, according to The Donkey Sanctuary, a British-based advocacy group. They noted mules are considered stronger and can carry more weight than donkeys. Last month, advocacy groups met with Santorini Mayor Nikos Zorzos to address several concerns about the welfare of equines, including how long they should work each day and how much weight they are allowed to carry. The Donkey Sanctuary suggests visitors look at the welfare of the animal before deciding whether to saddle up.

THE FACTS: Chipotle did not give away $100 gift cards for National Avocado Day on Tuesday, or any other day for that matter. A false offer, which circulated widely on social media last week, provided a link that took users to a page that read “National Avocado Day Get a $100 Chipotle Card.” They were then asked to “Invite 4 friends To Get Your Chipotle Card. After 4 Friends Click Your Link Get Your Card Quickly!” The false gift card page included a fake Facebook comments section. Laurie Schalow, Chipotle’s chief communications officer, told The Associated Press the restaurant chain was not giving away gift cards. “It’s a scam that the company is aware of and working to address,” Schalow said.