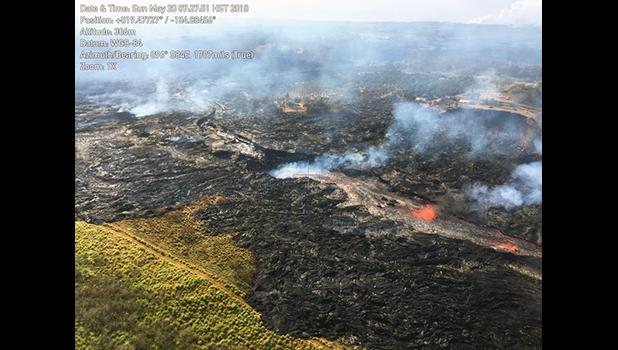 PAHOA, Hawaii (AP) — The Latest on an erupting volcano on Hawaii’s Big Island (all times local):

Hawaii officials say lava from Kilauea volcano has entered the property of a geothermal plant on the Big Island.

Hawaii County spokeswoman Janet Snyder says the lava entered the property late Sunday or early Monday. She says it stalled behind a berm on the property boundary.

The plant harnesses energy from the volcano for electricity. Underground wells bring up steam and hot liquid, and the steam feeds a turbine generator.

Plant workers as a precaution earlier this month removed 50,000 gallons (190,000 liters) of a flammable gas stored at the site.

Officials say a small eruption has occurred at the Kilauea volcano summit, producing an ash plume that reached about 7,000 feet.

The County of Hawaii issued a civil defense message early Monday about the eruption and warning that the ash plume could affect surrounding areas.

Officials say the wind carried the ash plume to the southwest, toward Wood Valley, Pahala, Naalehu and Waiohinu.

Authorities are warning those in the affected areas to stay indoors with windows closed and to drive with caution.

White plumes of acid and extremely fine shards of glass are billowing into the sky over Hawaii as molten rock from Kilauea volcano pours down a hillside and into the ocean.

Authorities are warning the public to stay away from the toxic steam cloud, which is formed by a chemical reaction when lava touches seawater.

Further upslope, lava is still gushing out of large vents in the ground in a Big Island residential neighborhood.

Hawaii County officials say sulfur dioxide gas emissions from the vents have tripled. At the volcano’s summit, two explosive eruptions unleased clouds of ash on Sunday. Winds carried much of the ash toward the southwest.