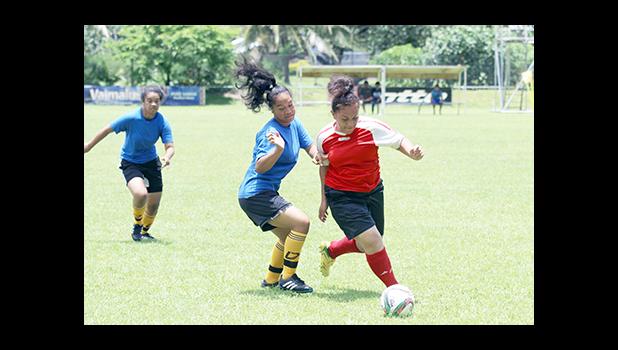 The Tafuna Jets are six points clear of PanSa at the end of the first round-robin of the women’s 2016 FFAS National League, and also current holders of the cup after a 3-2 win over Royal Puma on Saturday, Oct. 22.

This is Tafuna’s fourth straight successful defense of the FFAS Women’s Cup after taking it away from PanSa on Sept. 17, 2016.

In other games it was Green Bay 2, Ilaoa & To’omata 1, Vaiala Tongan 0, Pago Youth 0, and PanSa 3-0 in a forfeited win against Utulei Youth. This is Utule’s third forfeited game of the season, disqualifying them from continuing in this year’s 9-a-side competition.

The Jets are the No. 1 team in the standings, followed by PanSa, Lion Heart, Green Bay, and Royal Puma. Ilaoa & To’omata is sixth, and the next three teams are Pago Youth, Vaiala Tongan and Utulei Youth.

It was on own-goal by Royal Puma that would later turn out to be the game-winner in a game that had the Jets in front comfortably against last week’s, FFAS Women’s Cup challenger.

Vasati Makiasi and Mala both scored in the first half for Tafuna with the own-goal coming in the second half.

Down 3-0, Royal Puma replied with two goals Darlene Pani and Vai Su’a Leu. However, their comeback ran out of time with the Jets holding on to the Cup to close out the first round-robin.

Green Bay scored two goals in each half to hold on for the win against Ilaoa & To’omata.

Olyvia Ta’ase and Gina Wright scored for Green Bay, while Elsy Lui scored for their opponent.

Both teams had several opportunities to score but could not capitalize in what ended in a 0-0 tie.

It was the second tie for Vaiala Tongan, still winless at the end of the first, round robin of the competition. It was also the second tie of the season for Pago Youth.