Week No.7 – Junior Varsity Round No.2 of action 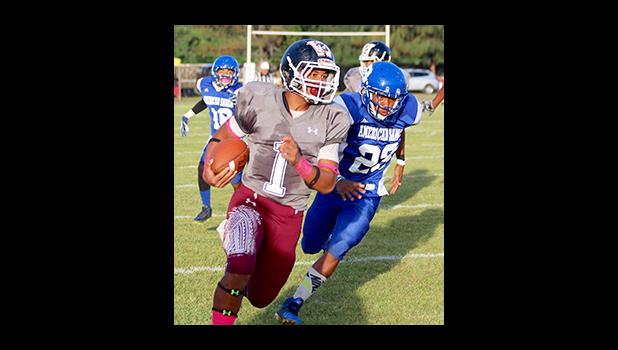 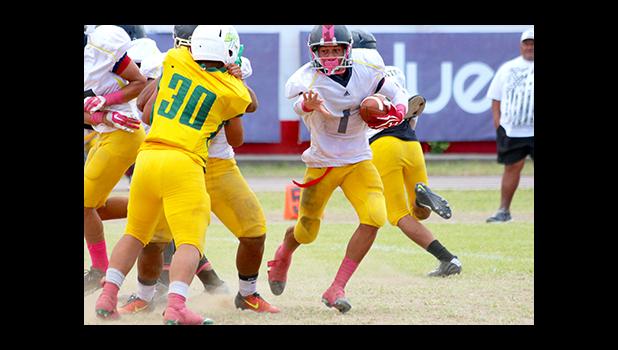 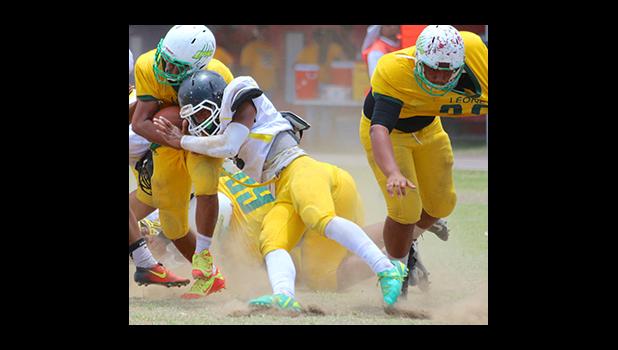 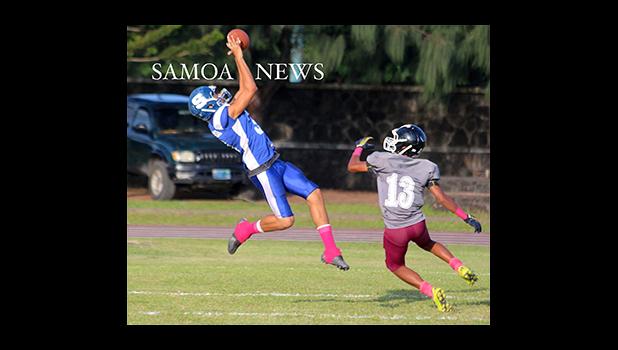 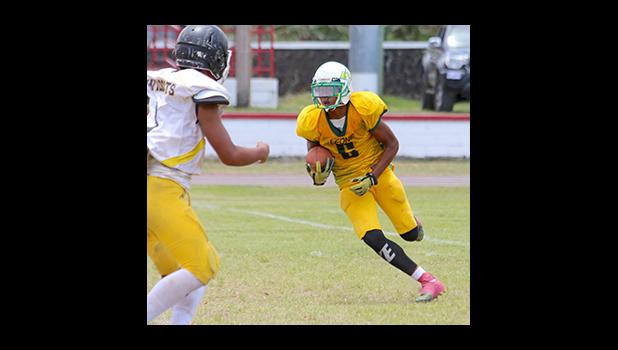 Last weekend’s Junior Varsity competition in the ongoing American Samoa High School Athletic Association (ASHSAA) high school football season, saw the Samoana Sharks denied a victory after the Tafuna Warrior’s 2-point comeback victory to start off week No.7 — then it was the Nu’uuli Wildcats who stunned the Leone Lions with a 6-point victory — a vicious battle that went all the way down to the last second.

During Week Seven’s Friday Night Lights between the Warriors and the Sharks, Jurgen Krusen led Samoana to a huge lead in the opening half of the game, but were disappointed in the second half when Herman Sufia and the Warriors came back and took the win in a stunning display of the option game.

Then for the second game of last Saturday’s triple header, the Nu’uuli Wildcats dominated the Lions from the beginning of the ball game — punishing Leone to the last second of the match, as the Lions desperately tried to tie things up during the closing seconds of the game.

The opening game of Week 7 last Friday evening showcased another fantastic performance by Samoana’s Jurgen Krusen, as he led the Sharks to the opening touchdown of the game – 9:36 in the first quarter of the game and Anthony Feala airs out a 30-yard pass to Krusen that was caught in the end zone for six.

Their two-point conversion — a quick pass out to Zephaniah Pati was good enough to secure them the early eight-point lead.

Midway through the quarter, and Feala again hooks up with Krusen for the second touchdown of the game — Samoana’s third down inside Tafuna’s red zone and Feala immediately turned to Jurgen with a quick slant pass that extended their lead 14 - 0. The Elton Titania and the Warriors defense denied the Lions two-point conversion.

Tafuna’s offense led by Panapa Filoiali’i were frustrated even more, when one of their offensive drives resulted in six points for the Sharks — Tafuna’s first down at midfield, and a hand off to Filoiali’i ends up stripped and fumbled — straight into the hands of Krusen, who turned up field and scored his third touchdown of the game early in the second quarter of play.

It wasn’t until midway through the second quarter of play, when the Warriors shook off their butterflies, and started converting on downs with a lethal passing game behind the arm of Minute Faitasi who also threw their first touchdown pass — Warriors third down on Samoana’s 30-yard line, and Faitasi hooked up with Filoiali’i on a threaded pass that scored Tafuna’s first six points of the game.

Their two-point conversion, a quarterback sneak by Faitasi brought them back to life with a 20 - 8 trails.

And, the second half of play had the Warriors written all over it, when Titania led Tafuna’s defense to rejecting Samoana’s end zone attempts, as they adjusted to Samoana’s threatening air raid attack.

Filoiali’i and Herman Sufia led Tafuna to victory when they both scored six a piece with Faitasi and Titania both converting extra point conversions — they came back, winning 24 - 22.

The Lions led this one with the opening touchdown of the game, but it was Nu’uuli who came back with the vicious fumble recovery by Figota that stunned the Lions into a headache of a game, as they were over taken by Joseph Mauga and the Wildcats who dominated Leone in the opening half of the game.

9:33 in the second quarter of the game, and Iosefa Mauga marches to the end zone on an inside counter play that scored Nu’uuli’s second touchdown of the game.

Their two-point conversion was good enough to give them the lead.

2:18 in the second quarter and Mauga again leaves behind a dust trail on his way to recording his third touchdown of the game – an inside counter play to Mauga that turned out to be a 65-yard touchdown carry for Mauga. Their two-point conversion pass to #84 was good as Nu’uuli extended their lead 28- 6.

Then with just 19 seconds remaining in the first half of play, Leone finally comes back to life when Fa’amoe hooked up with Ben Tikeri, who ran in their second touchdown of the game, a post route pass to Tikeri that turned up for six. Their two-point conversion, quarterback keep by Fa’amoe was good enough to bring them back to life late in the second quarter with a 28- 14 trail.

Not too long after that – 5 seconds remaining on the clock until halftime and Nu’uuli shocked Leone again. After finding signs of life, Nu’uuli turned their lights off again – Wildcats first down at midfield, and new quarterback, Uriah Te’o fires a long bomb out to Aoelua for the closing touchdown of the first half.

Their two-point conversion was good after a pitch play out to Mauga to secure a 36 - 14 lead into halftime.

Leone came back in the second half with a whole different defense — a unit more vicious and coordinated compared to the first half, as they managed to shut out Nu’uuli completely in the second half of play, while their offense worked up the scoreboard.

Lions (#22) returned a 20-yard interception for six to score Leones’ third touchdown of the game. Their two-point conversion was good after a quarterback sneak by Fa’amoe.

Leone, determined for a comeback, was successful in recovering the onside kick off, that gave them another shot towards the end zone – 7:36 in the fourth, and Leone answers back with a 15-yard quarterback keeper by Fa’amoe for another Lions touchdown—– it was the same play to Fa’amoe again for the two-point conversion that brought the Lions back — with in 6 points of the Wildcats score.

But it was not to be: As the final seconds ran down, the Lions consistently kept to their air attack, as they were hoping to convert as well as stop the clock. However, it wasn’t long and Leone heard the closing signal of the 4th quarter — and had to walk away with a six-point loss against Nu’uuli — 36- 30.