Team Amerika Samoa in the 808 State 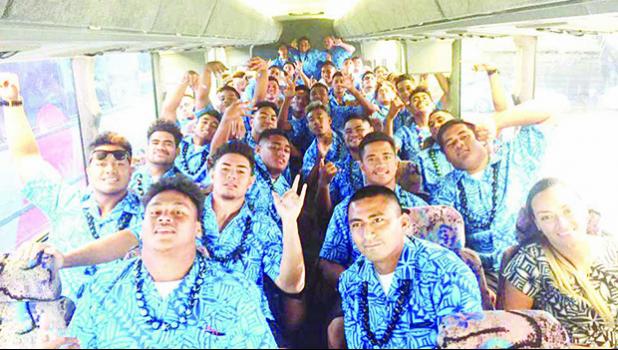 By
Tony Gasu
tony@samoanews.com
Overall, the team has been in good spirits – they are still trying to adjust to the cool air, they know that this is a ‘business trip’, not a vacation.”

Samoa News interviewed Pati this past Sunday via email. He was asked about the teams’ reactions upon their arrival in the 808 State — responding, “Overall, the team has been in good spirits – they are still trying to adjust to the cool air, they know that this is a ‘business trip’, not a vacation.”

Pati said, “For some students, this is their first time here in Hawai’i.”

Hei said, “All three teams are staying at the Aqua Surf Hotel in Waikiki – we arrived Saturday morning and the we had our first practice at Kapiolani Park that same evening.”

According to Pati, our local all-star athletes were treated to light running and reviews during their first feel of practice away from home.

When asked about the weather and its possible affect on our athletes’ performances, Pati said, “The weather is much more cooler here in Hawai’i compared to American Samoa. The players are adjusting slowly to the cooler air — I don’t think it will be a factor.”

Pati told Samoa News that right now they want “to have our players focused and relaxed – we had practice yesterday morning and will be out on the field again today. Tomorrow, we’re going light with just a walk-thru practice and reviewal of plays, then we’ll field for our first game this Thursday.”

On behalf of all the teams and coaches in Hawai’i representing American Samoa, Pati said, “We just want to thank the people of American Samoa for their prayers and support – Thank You Honorable Governor Lolo Moliga for making this possible.”