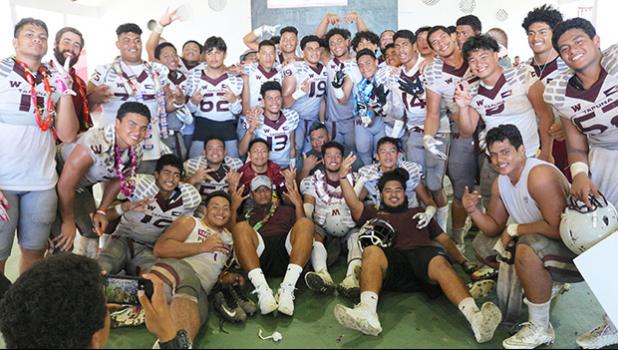 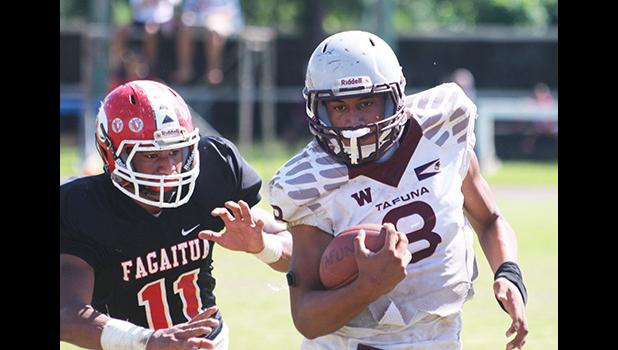 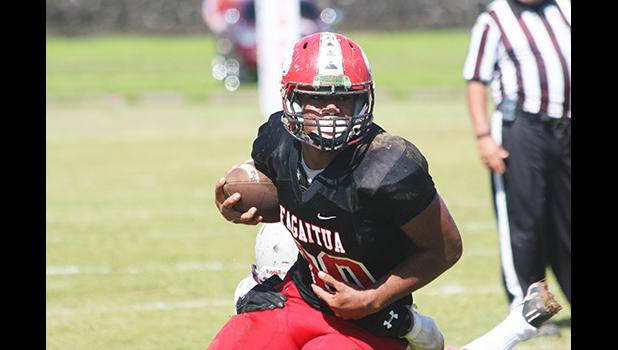 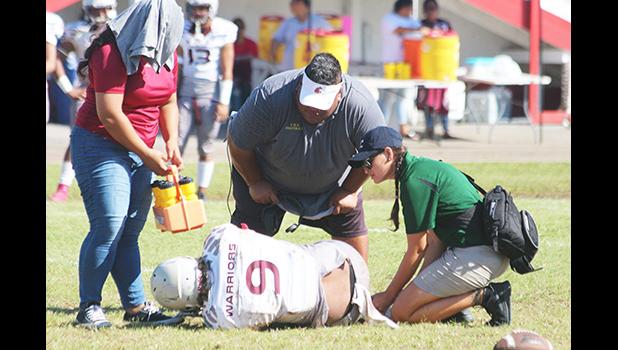 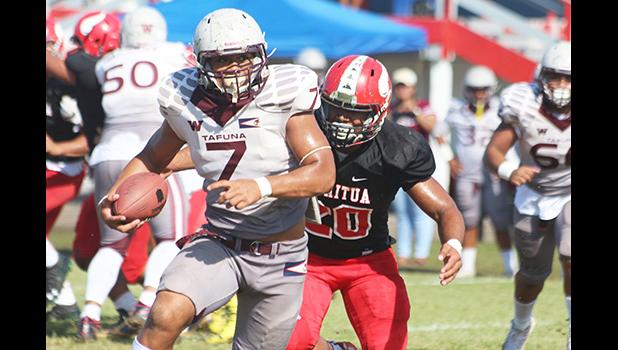 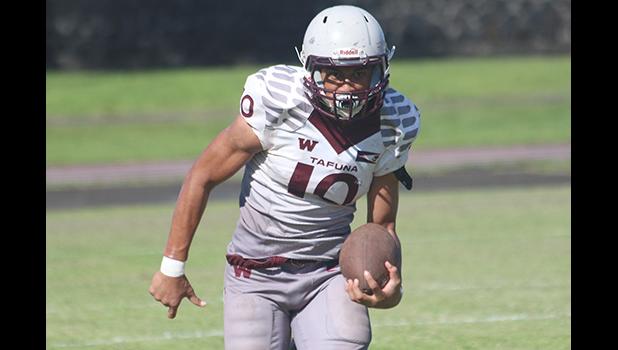 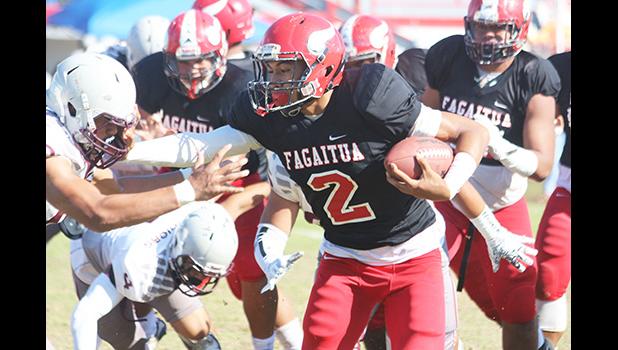 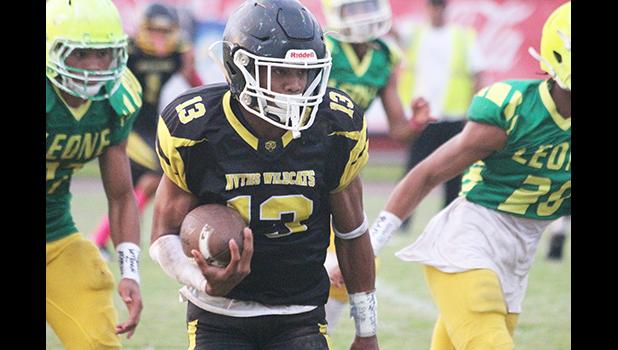 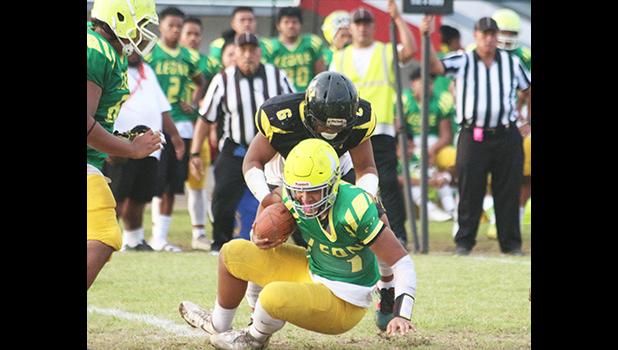 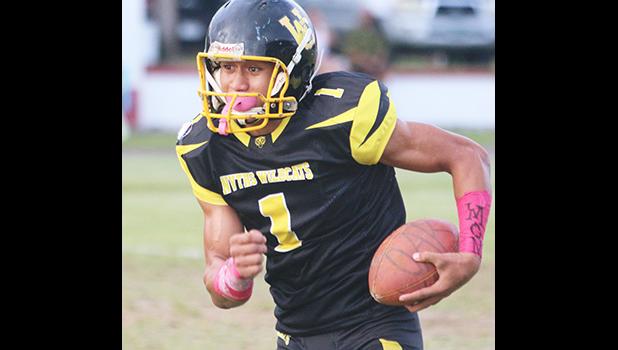 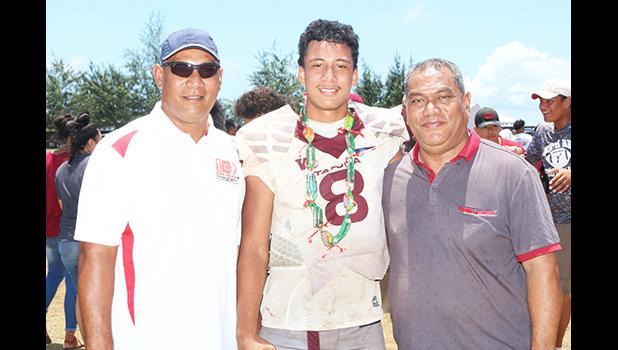 Pago Pago, AMERICAN SAMOA — Head Football Coach Kevin Magalei and the ‘Dub Nation’ are now celebrating Tafuna High School’s victory after they claimed the 2018 ASHSAA’s Varsity Football Championship Title last Saturday morning with an ‘Undefeated’ record after a stunning 34 - 31 comeback to officially close of this year’s football season, in Magalei’s first year as Head Coach – ending a 5-year drought and bringing back the title to the Warrior Nation.

Tafuna Warriors have now claimed both the 2018 Varsity and Junior Varsity Championship titles – with undefeated records in both divisions.

Coverage of the 2018 ASHSAA Football season is proudly sponsored by Congresswoman Aumua Amata.

Under the Friday Night Lights, Head Coach Andrew Bill Ena and his Mighty Nu’uuli Wildcats ended the season on a high note, after they dominated the Leone Lions 30 - 2 in their Senior Game – Ena relaxed on the bench with his players as his Offensive Coordinator William Lobendahn brought out every single play in the playbook to slay the Lions in their second biggest win of the season.

Head Coach Sua’ese Pooch Ta’ase and his Faga’itua Vikings set off to be the spoiler of the Warriors perfect season record, and indeed it was looking that way from the start of the first half – but it didn’t quite end the way they wanted. After dominating from the opening half, the Warriors took the second half and showed why they were undefeated — with a stunning offensive performance to come back and take the lead in the final quarter of the match.

In the first quarter, Tafuna’s first offensive drive of the game ended up in the hands of Steven Fiso of the Vikings when Fiso picked off Francisco Mauigoa with a one-handed catch for an interception to bring Advent Migi and the Vikings offense for their first offensive drive inside the red zone; and it’s Faga’itua’s third down from the 10-yard line — Migi muscles his way through defenders to score the first touchdown of the game with just 7:23 into the opening quarter of play. It was a fullback give to Jr. Maloa for the two-point attempt from a Power-I formation that gave the Vikings an early 8-point lead.

Vikings two-point attempt saw Migi running over defenders on his way to crossing the goal line as Vikings extend their lead 16 - 0.

Tafuna finally answered in the second quarter, after Panapa Filoiali’i slipped through the heart of the Vikings defense to score a 20-yard touchdown reception, bringing the Warriors back to trail the Vikings 16 - 6. Their two-point attempt was denied by the Vikings; after Migi and a host of Vikings brought down Mauigoa in the backfield for a loss.

Vikings then answered with a stunning first and long situation from the 34-yard line, when Migi dropped back to lob a screen pass to Fiso, who juked his way out to the sidelines and was gone with the wind to score Faga’itua’s third TD. The Vikings were already ahead 23 - 6 after the field goal conversion by Manuita Sofeni with just 3:58 remaining to play in the first half of the match.

With just 1:12 remaining in the opening half, Tafuna brings it in for their second TD with a QB draw that set up the Warriors at 23 - 12 going into the second half.

Tafuna Warriors entered the second half of the match with a whole different look, as they kept to their ‘Air Attack’ and utilized Mauigoa’s passing abilities – Tafuna’s first down from the 30-yard line and Mauigoa bombed a long pass to Frank Mulipola who caught that pass in the end zone to score Tafuna’s third TD of the game.

The Vikings who have always been known as the “second half” team, shocked the Warriors when they played out their No Huddle running game that worked tremendously to giving them six more points – Vikings extend their lead 29 - 18.

Their two-point conversion saw ‘Beast Mode’ Advent Migi again running over defenders to cross the goal line to put the Vikings ahead 31 - 18.

Just when the Vikings thought that they had this one under control and were looking to put this season into the play-offs, the Warriors played ‘Now or Never’ to give it their best shot to winning the title – and 14 seconds remaining in the third quarter, Tafuna’s second down from the 10-yard line and Mauigoa fired a quick pass to Pulenu’u Fono on a fade route to scoring the Warriors fourth TD of the game.

The Vikings over pursued on the two point attempt as they targeted Mauigoa on a quarterback keeper for two – instead Mauigoa threw a shovel pass to Herman Sufia on a cross route to score the two-point conversion for the Warriors as they inched back to trail the Vikings 31 - 26.

To open up the final quarter of play, the Warriors knew that it was their game to win, when they saw Francisco Mauigoa firing a long pass to Pulenu’u Fono from the 31-yard line to scoring Tafuna’s fifth TD of the game, as the Warriors had now come back to take the lead 32 - 31.

After realizing that Tafuna had passing options in their recent two-point attempt, the Vikings decided to stay at home and the Warriors Mauigoa made them pay for it when Mauigoa sounded the snap, and he tucked and ran with it behind his blockers to convert the two-point try for the Warriors, as he put Tafuna ahead 34 - 31.

This match up went down to the final second of the match, as the Vikings fought back hard to a heart-stopping fourth and long situation at Tafuna’s 24-yard line, with 1.3 seconds remaining in the ball game, and the Vikings set up to go for a field goal to try and tie things up.

Faga’itua’s hopes for a play-off were crushed when they saw the snap go over the head of the holder, Blessing Esekia, as the Warriors defense stormed the backfield and disrupted Faga’itua’s final play of the game to officially claim this year’s ASHSAA Football Varsity Championship title, with the Warrior Nation storming the field in celebration of the title that had fled them for the past five year.

Congratulation to Head Coach Kevin Magalei and his Undefeated Champions!!!

The Senior Game for both Leone High School and the Nu’uuli Voc-Tech ended in a huge victory for Head Coach Andrew Bill Ena and his Wildcats, as they not only won their second biggest win of the season, but they managed to slay one of the giants in ASHSAA football, the Leone Lions, by a huge margin, after a dominating overall effort by the Wildcats to end their season on a high note.

The Wildcats Offensive Coordinator William Lobendahn brought out every single play in the playbook to open up the first half in a big way – Bringing David Talaga to play starting quarterback in their Wing-T formation, as Nu’uuli had control over the Lions defense from their opening drive of the match.

Nu’uuli’s second down from the 25-yard line and Talaga with the option-quarterback read broke through midfield and out to the end zone to score the first TD of the game to take the early 6-point lead.

Midway through the opening half of play, and Iosefa ‘Mighty Joe’ Mauga of the Wildcats broke loose from the 25-yard line, speeding his way through centerfield and into the end zone to score the Wildcats second unanswered TD of the game, as the Wildcats extended their lead 12 - 0.

Opening up the second half of play was a strange way for the Lions to score their first two points of the game – Wildcats first down from their own 1-yard line, and Isaako sent Mauga out to the sidelines with a sweep play and Mauga picked up a huge first down for the Wildcats at the 25-yard line. But there was a flag in the backfield – White Hat official Mike White indicated that there was a holding penalty against the Wildcats inside the end zone, and as of result of the play – a ‘Safety’ — it gave the Lions 2 points as they now trailed the Wildcats 12 - 2.

The Wildcats opened up the fourth quarter of play with a huge run by Mauga – Nu’uuli’s second down at their own 43-yard line, and Mauga slipped through the middle and outran four defenders to score a huge TD for the Wildcats as they extended their lead, 18 - 2.

Iosefa ‘Mighty Joe’ Mauga scored two more huge TD receptions for the Wildcats to end the season with a victory of 32 - 2 against the Leone Lions who kept dropping the ball in the red zone to lose big in their final game of the season.