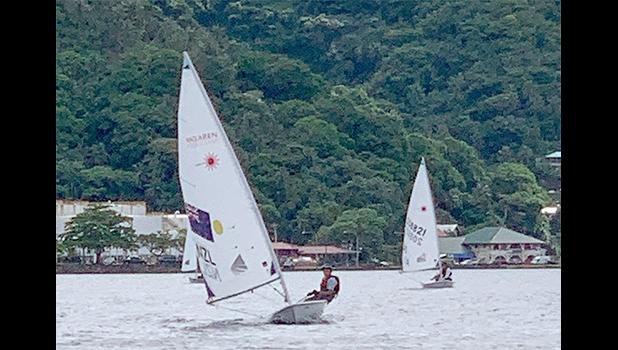 Pago Pago, AMERICAN SAMOA — 13-year old Junior sailor Carlos Leonel Sanchez of Utulei village leads into the first turn at the red buoy at the entrance of the harbor in the 1st race of the day. The Pago Pago Yacht Club (PPYC) and affiliated Clubs opened its 1st day of Open Laser Sailing Races yesterday, April 15th, 2019 that coincided with the Flag Day week-long celebrations.  The Notice of Races distributed to the public notified and invited all to participate in the open races scheduled for April 15, 19 & 20th.  The open races are also being used as qualifying races for the upcoming Pacific Games in Apia, Samoa.

To qualify for the Pacific Games, a sailor must meet the eligibility requirements as set forth by the ASNOC and Pacific Games charter.  There are two remaining days of the qualifiers and all sailors are encouraged to participate and compete for a chance to represent American Samoa at the Pacific Games.  The final two days of qualifying races are this Friday and Saturday starting with a 9:00am registration.  The races are open to all sailors in American Samoa.

The open qualifying regatta was well-organized and executed smoothly over 2 ½ hours of three races. Although the turn-out was not as hoped for since not all laser sailors on island participated in the 1st day of races, those that did compete had fun and were filled with much excitement even after sailing in challenging shifting wind patterns. The PPYC is awaiting the arrival of 6 additional Lasers to its fleet and repairing 4 Lasers from the its old fleet for use by aspiring sailors. Many new sailing enthusiasts and family members of sailors also assisted with race preparations.