Samoan track and field star aspires to compete in the Olympics 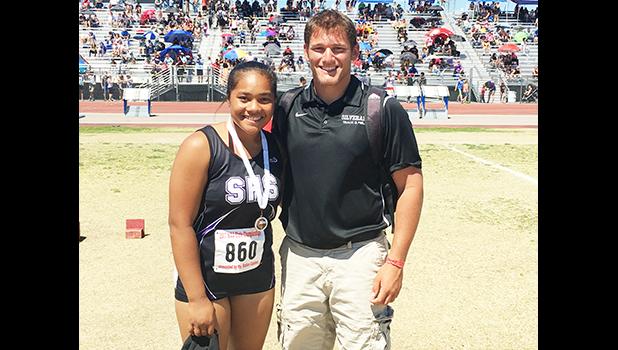 Kau’ilani Maryann Wannett Tufieavi'iafalaufuta Malauulu Misipeka has done the unthinkable. An avid volleyball player, the 15-year-old hung up her knee pads this past season to try something new.

Needless to say, the athletically gifted daughter of Tufi Malauulu of Nuuuli and Keiki Misipeka of Fagatogo did her family, and the territory, proud. She literally ‘threw’ herself into track and field – a world unfamiliar to her until that point - and came out shining like a star.

She was the only freshman from Silverado High School to compete in the Nevada State Track & Field throwing events. She placed 3rd in the 4A State tournament (the highest level in Nevada), and took home 7th place in regionals for discus.

Onlookers cannot believe that this was Kau’ilani’s first time competing in track and field, as her performance was that of a seasoned thrower with years of practice.

“Never in her life had she thrown a discus or shot put, let alone be a part of a track and field team,” said her mother Tufi. “For her to end the season as 3rd overall in the State for shot put and 7th for discus, and to be the only freshman competing at the finals in her categories, totally deserves recognition. We love you Kau’ilani Misipeka.”

Following her remarkable performance, Kau’ilani’s proud dad Keiki posted on social media: “The only freshman to compete in the event. Grateful I was able to watch you perform. Vi'ia Le Atua Always – ‘Samoa Muamua Le Atua’."

Kau’ilani was born in Honolulu, Hawaii and just completed her ninth grade year at Silverado High School in Las Vegas, Nevada. This fall, she will be a sophomore at Garden City High School.

She told Samoa News over the weekend that her goal is to earn an academic track and field scholarship to attend college. “Another goal of mine is to compete and represent American Samoa in the junior Olympics and hopefully in the Olympics,” she added.

Kau’ilani’s aunty is Lisa Misipeka, who competed and represented American Samoa in track and field at the Olympics, the South Pacific Games, and other international events.

“She was ranked 3rd in the world at one point, and won several medals for American Samoa,” Kau’ilani pointed out. “She has inspired me to pursue track and field and follow in her footsteps. She has been inspirational in guiding and helping me with my training.  One day I would like to return to American Samoa and share the knowledge I have gained with the youth.”

Kau’ilani spent her early life in American Samoa, attending Lupelele, Uifa’atali Peter Coleman, and Manulele Elementary Schools, before she and her family relocated to the US in 2013.

Her father Keiki is a household name in the territory, always at the forefront of helping student athletes find schools and programs off island that suit their individual needs.

“I'm grateful for her accomplishments at a very young age,” Keiki said of his daughter Kau’ilani. “She has three more years of high school left. God willing, she reaches her goal to earn a scholarship and compete in the Olympics.”

Keiki concluded, “I constantly remind my kids that opportunities for the youth of American Samoa are very limited. They should be grateful for the opportunities available to them here in the US, and to not take anything for granted.”