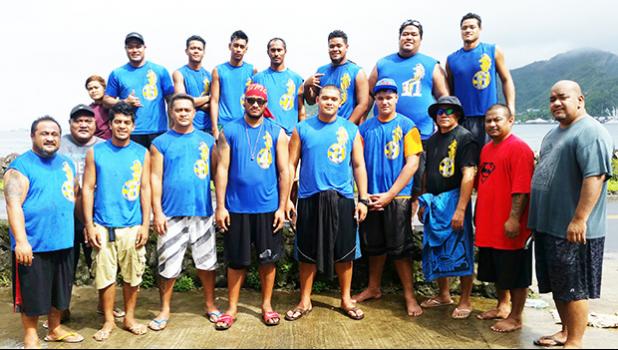 When they first assembled three months ago to train and play as a team during the American Samoa Volleyball Federation’s (ASVBF) league, the boys of Le Puataunofo never thought they’d be invited to compete during Samoa’s Independence Day celebrations, set to kick off later this week.

Four local teams have received invitations to play during the festivities in the independent state and Le Puataunofo was one of them, despite not reaching the Top Four in the only two leagues they’ve played in as a unit since they became a team in March.

Team manager Teni Luamanu told Samoa News over the weekend that the team started off with just a handful of family members and youth from around the village. “HC Uti gave us his blessing when we asked permission if we could form a team and use his front yard for practice sessions,” Luamanu shared. “And while he is currently off island, we know Uti will be cheering for us,” he continued.

Le Puataunofo is still very new to the spotlight. The youngest player on the team is a high school freshman and the oldest is in his mid-40s.

None of the high schoolers on the team play volleyball for their school.

“This team was formed not only for the purpose of competing, but to give the youth something to do - an alternative to roaming the streets and getting into trouble,” said team advisor Joe Uti.

“It’s not all about winning. The main thing we want to stress to the players is the importance of fellowship, good sportsmanship, and experience,” Uti added.

Many sports teams — particularly those not affiliated with high school athletics – constantly preach about the need to prioritize education. For the young ones in Le Puataunofo, it isn’t just a speech. It’s reality. The students on the team have known since Day 1 that if their grades aren’t where they need to be, they will not be allowed to compete. Exams need to be taken and assignments turned in before they even think about stepping on to the court.

As an example, Luamanu referred to a young teen – a 9th grader on the team – who will not be competing in the upcoming competition in Samoa because “he needs to study and sit his final exams next week.”

The other high schoolers on the team – including seniors set to graduate in two weeks - have arranged to take their final exams over the next couple of days, before the team departs for Samoa on Thursday.

Altogether, the traveling entourage will include 12 players and a coaching staff of three: Teni Luamanu, Nuuuli Tupa’i, and Lalomilo Mano (a veteran championship coach for the Faga’itua Vikings).

In addition to a boys team, Le Puataunofo also has a girls team. And while the females were scheduled to travel alongside their male counterparts later this week, Luamanu said they’ve decided not to take them, because four of the members are high school seniors who need to wrap up some school-related projects.

Three of the girls however, will be playing in Samoa; not for Le Puatunofo but instead, for the American Samoa National Team. They are: Tiffany Vasa, Jayne Tuvale, and Guadalupe Luamanu.

When asked if players who live outside of Lepua are welcomed to join the team, both Luamanu and Uti replied affirmatively, but added, “It depends on their attitude. We want kids who are disciplined, those who come to play and learn, not come to start trouble.”

Luamanu said the volleyball program is a way to get the youth together, “outside of the usual church activities.”

The team arrives in the independent state this Friday (Samoa Time) and the very next day, numbers will be drawn to find out their schedule of games. Samoa News understands that in addition to the four local teams who have been invited to play, twenty teams from Apia will be in the mix.

Luamanu said that no matter what the outcome of the games in Samoa, the goal is to keep the volleyball team together, and keep the program going not only for competitions, but to keep the youth in great physical shape and give them something to do.

The team is named after the land on which the Catholic Church in Lepua is built. Most of the team members grew up singing in that church. It is likely that Le Puataunofo will be playing against seasoned teams and much more experienced players during the upcoming tournament but hopefully, the players will come home with their heads held high – win or lose.

The team is scheduled to return home next Friday, June 2nd.