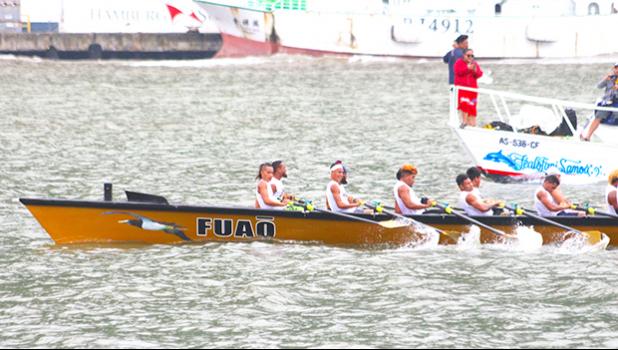 Pago Pago, AMERICAN SAMOA — The 2018 Flag Day Fautasi Race scheduled for last Saturday was moved up to this past Monday not only because of harsh weather conditions, but because most of the captains were unable to abide by committee rules to move their boats behind the buoys at the starting point.

On Saturday, it was a short racecourse — just outside the mouth of the harbor — due to the weather with the pouring rain making visibility difficult, while ocean swells made it impossible to align the fautasi for a fair starting line up.

Come Monday morning, Lt. Governor Lemanu Peleti Sialega Mauga called a meeting with all the captains at the committee tent at what is usually the finish line of the race to discuss regatta issues.

It was there everyone agreed that the race would start within Pago Pago Harbor — using the finishing line as the ‘start’ — and race out towards the buoys near Onesosopo, then turn around and head back into the Harbor to finish – the same style of race that is hosted during the annual Coast Week.

With the agreement of all the captains, the race was on and two heats were scheduled to accommodate all 9 competitors with the final results coming by way of who clocks the best course time.

The heats began around 10 a.m., with no rain, although overcast conditions continued.

And, with the course set as a ‘turn around’ inside the harbor and based on time, everyone was betting with the knowledge that these turn-around races always seem to favor the fautasi designed with the back chopped off, like the Fuao and Paepaeulupo’o, which are built to easily maneuver turning points – leaving fautasi like the Aeto, Matasaua II, and the Taema II, built for straight hauls — meaning they have to take wider turns.

And, the Fuao and the Paepaeulupo’o II certainly showed this advantage by leading the race from the starting point to the turn-around.

The first heat, which featured the Fuao, Matasaua II, Fealofani Samoa III, Iseula Ole Moana II, and the Aeto, was a tight one to begin with, as the starting strokes for all competitors had them vying for the lead to hit the buoys ahead of the pack.

It didn’t take long for the Fuao to get ahead of the rest; when the Vatia fautasi hit the cannery area, they didn't look back and led the race from then on.

The Iseula Ole Moana II was just behind the Fuao heading towards the turning point, but they were shocked to see the Matasaua II creeping behind them near the turn, heading back inside the harbor.

The Matasaua II overtook the Iseula Ole Moana II in Utulei and from then on, they were out to chase the leader, the Fuao, which was clearly ahead.

Meanwhile, the Fealofani Samoa III was just behind the Iseula Ole Moana in 4th place, and the Aeto from Pago Pago was in deep trouble, trying to balance their way from the effect of the waves that were caused by the fautasi ahead of them.

Despite being in the clear lead, the Fuao continued to race for their time — acknowledging that the second heat could bring heartbreak with the Paepaeulupo’o II waiting to compete in the second heat.

The second heat was comprised of the Taema II, Paepaeulupo’o II, the Fono, who were utilizing the God is Great fautasi, and the Toa o Samoa (Army Reserve) crew who rowed the Sinapioa fautasi.

The Paepaeulupo’o II immediately took off during the opening of the second heat, escaping with the lead just past the Marina in Malaloa – but just behind them hanging on to second place was the Army Reserve crew, who joined the faigamea i le tai for the first time.

As the second heat was passing the cannery area, the Taema II caught up with the Toa o Samoa crew and overtook them before the race reached Aua. Meanwhile, the Paepaeulupo’o II was clearly ahead and was reaching the turning point of the race.

But as Aua was turning to head back into the harbor towards the finish line, they were shocked to see the Taema II creeping up behind them near the buoy – and this was where the Taema II had their work cut out for them, as they had to take a much wider turn compared to the Paepaeulupo’o II, adding more distance between the two as they both headed back towards the finish line.

The Paepaeulupo’o II crew led comfortably with long strokes to take the clear lead ahead of the Taema II and the other two competitors fell behind even more — at this point — there wasn’t a question as to which team would win the second heat.

At the finish line, the Aua villagers were seen shouting with joy when they saw the Paepaelupo’o II with their ‘apa foe fa’atigi’ finishing in first place, and just behind them by a distance of four fautasi lengths was the Taema II; placing third was the Toa o Samoa, and falling way behind the rest was the Fono, who finished in last place.