Joseph Taufetee is a rugby star 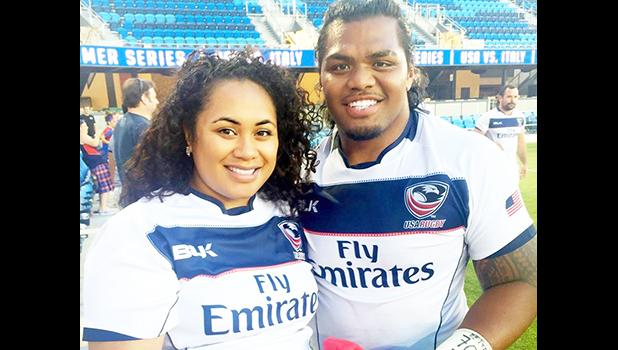 Joseph Taufete’e was born in the village of Nu’uuli and moved to California when he was 5 years old. Growing up in the United States his motivation was to play in the NFL like any other young man that came from the islands.

However, “when I was a young teenager, I met a girl from along the beach in California. Her name is Noeleen Bette Meni and her family is from Western Samoa. We started talking and I knew she was the one for me — so I really wanted to impress her,” Taufete’e told Samoa News in a telephone interview.

Joseph visited his new girlfriend’s family, eager to make a good first impression. But little did the American Samoa-born know that meeting the woman of his dreams would also help him fulfill his sporting dream.

He said, “I wanted to do anything to make them see that I was a good boy for Bette. They talked so much about rugby and how much the kids in the youth are doing so well at it. So I thought if I play rugby and do good then they would be so impressed with me.”

Taufete’e’s wife told Samoa News, “To look back at that time and see how God used Joe’s intentions of impressing my family and I, to bring him to where he’s at now with his rugby career is always funny.”

Since meeting his in-laws, Taufete’e has gone on to play in varying levels of rugby across the world.

In 2011, he was a member of the Belmont Shores u19s before moving up to the Belmont Shore D1 side a year later. In 2014, Taufete'e split time playing for Sciota Valley R.F.C. (Columbus, OH) and Otorohanga R.F.C. (Waikato, New Zealand).

In the fall of 2016, Taufete'e was given the responsibility of captaining the USA Rugby Selects at the Americas Pacific Challenge developmental tournament in Uruguay.

At 286lb, he is thought to be the heaviest hooker in the world. His powerhouse physique has helped him make an impact with English Premiership side Worcester Warriors since joining in December last year. He currently now lives in England playing for the Worcester Warriors and the USA Eagles.

“As a Samoan, growing up in the states, our motivation is to play in the NFL. Now playing rugby around the world, I meet a lot of Samoans and it’s humbling. I see these guys play for the Manu and it’s a huge honor for a Samoan to represent Samoa in that way,” Taufete’e said.

Noeleen told Samoa News, “I wake up every morning continually thanking God that he created a man who knew exactly how to make me feel loved. I’ve never had to question his love, and he’s never shieded away from expressing it. But man does God works in mysterious ways and sure has a quite a sense of humor! Joe wouldn’t have made it this far, if it weren’t for God. I’m just the lucky girl who was able to witness it from day one.”

Taufete’e concluded by saying, “Our relationship was God sent through everything that has happened with rugby, my wife and me. God has seen every step of the way. For the young athletes pursuing a dream in sports in the Samoa Islands, God has blessed our people with a gift. Our talents are from God and we have to do what we can to glorify His name.”

He also wanted to give a special mention to his families here in American Samoa — the Taufete’e & Amouta-Manu Family.