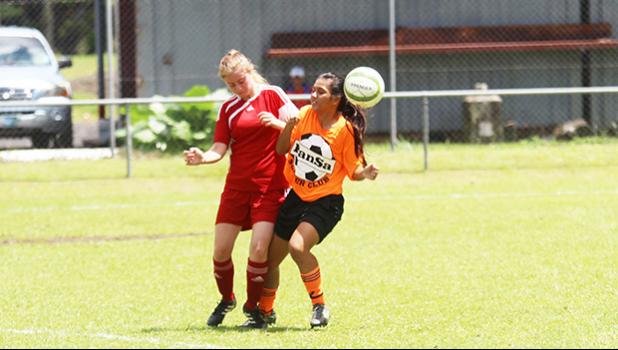 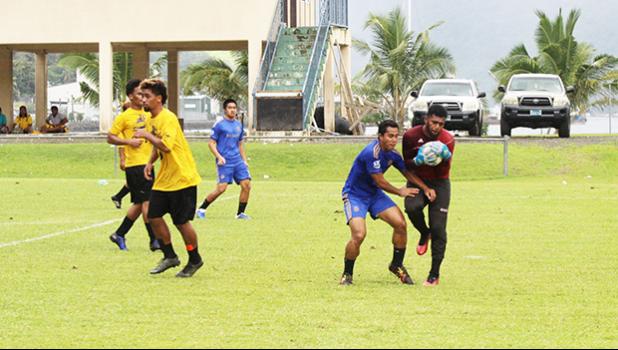 The women’s FFAS National Cup has changed hands for the second week in-a-row with the Tafuna Jets taking it away from Taputimu Youth in a 1-0 win on Saturday, Sept. 9, 2017 at Pago Park Soccer Stadium.

It was only Match Day 2 of the women’s 2017 FFAS National League but the Cup has now changed hands twice, with Taputimu Youth taking it away from Ilaoa & To’omata, before losing it away last Saturday.

Incidentally, Tafuna held the Cup last year as well before losing it away to Ilaoa & To’omata.

Tafuna Jets managed to hold on to their slim 1-0 lead despite playing with only nine players, as two could no longer continue playing due to injuries, and they had no one else on their bench to make up their numbers.

Vasati Makiasi scored for Tafuna in the first half, and from then on relied on their defense to hold off Taputimu from equalizing.

With the Cup now in Tafuna’s hands, the door has been re-opened for Ilaoa & To’omata to try to win it back as they will challenge the Jets for it this week. Taputimu Youth will play against Vaiala Tongan.

Vaiala Tongan came back from a 1-0 deficit to beat PanSa 2-1 thanks to a brace of goals from Elcy Lui.

Maryann Leone and Darlene Pani scored first half goals while Vaileu Sua made it 3-1, giving them an extra cushion in the goals department after Princess Fegauia’i scored for Green Bay.

Ilaoa & To’omata will prepare this week to challenge for the Cup against Tafuna while Black Roses will play against Lion Heart.

Fa’afeu Amisone helped Pago Youth win their first game of the season by scoring the only goal of the game against Lion Heart last Saturday.

The tie allowed Pago Youth to retain the Cup in their first defense since winning it from Utulei Youth a week earlier, with the former and Green Bay sharing the weekly monetary prize equally. The team that wins the cup gets the monetary prize all to themselves, but if it ends in a draw both teams will split it down the middle.

Green Bay came out fighting and gave it their best shot, easily putting forth their best performance that surprised a lot of the fans watching. The game went down to the wire and they gave a good accounting of themselves.

Green Bay was down by a goal twice against the defending champs but fought back for the equalizer on each occasion.

As the first half ended, Gabriel Taumua raced to a lob pass with defenders caught standing around waiting for an off side call. However, Taumua had timed it perfectly as the flag stayed down, and he slotted the goal into the far post for a 1-0 lead.

In the second half Pati Forsythe equalized for Green Bay 10 minutes in, before Rambo Tapui scored on an indirect free kick midway through the period to go up 2-1.

Pamata Punefu would equalize for Green Bay after getting to a cross that Pago’s goalie missed punching away.

Pago Youth will take on Vaiala Tongan B this coming Saturday while Green Bay faces off against Taputimu Youth.

This game featured a few of the competition’s contenders for the 2017 title, but Lion Heart proved to be the better of the two with a 6-1 score at game’s end.

At halftime break Lion Heart was up 3-0 thanks to goals from Jordan Leilua, Harvey Manu and Nelson Moala. In the second half Ufi Feagaimalii, Hiva Tu’ulau and Poni Maile added to those scores. Lion Heart will play Black Roses this week.

Sione Moeaki scored the lone goal for Vaiala Tongan A, and they will prepare this week for the Tafuna Jets.

Royal Puma took it to Black Roses with a 5-0 showing, thanks in part to a hat trick from Walter Pati.

It was a tough first half with Royal Puma only leading 1-0, but in the second half they were able to score in bunches and come away with a big win. Anapogi Fonoti and Filo Mata’u scored the other two goals in the game.

Sam ‘Pili’ Taulealo, Ati Savaiinaea and Pouono Samuelu all scored two goals each in their 7-1 win against Vaiala Tongan B last Saturday.

Despite the score, it was a close game in the first half with the Jets only leading 2-0 from Taulealo’s brace of goals.