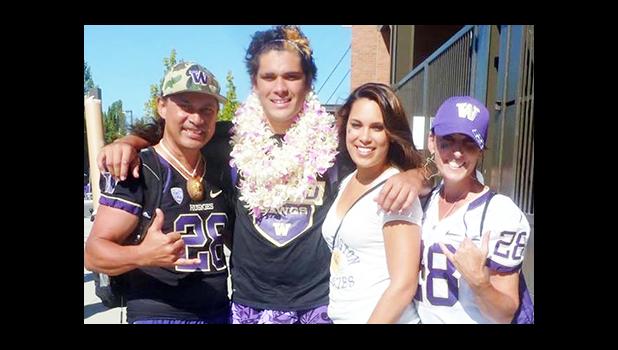 Dad: “God has been the author of Psalm’s book of his UW journey…”
By
Blue Chen-Fruean
blue@samoanews.com

Pslam Fa’afoisia Pulemagafa Wooching’s college football years may be over, but his presence as a co-captain for the University of Washington's Huskies is unforgettable.

And while the #4 Huskies were defeated (7-24) by #1 Alabama this past Saturday at the Chik-fil-A Peach Bowl in Atlanta, Georgia, Wooching, 23, has unquestionably contributed much to the ‘Purple Reign’.

UW’s hopes of a chance to play for the national championship title were crushed after their devastating loss to ‘Bama over the weekend but one thing’s certain: team co-captain Wooching has definitely left his mark in the Pacific Northwest.

The 6’4” – 231lb. outside linebacker from Kailua, Kona, Hawai’i, is a Kealakehe graduate who, just last month, received an Academic Excellence Award.

Brains and brawn - the complete package.

He arrived at UW in 2012, and was moved around from fullback to defensive end and later settled in at linebacker.

Wooching’s rise to fame goes hand-in-hand with the Huskies’ climb in Year 3 under head coach Chris Petersen. Before this recent run, the Huskies hadn’t been a a topic of conversation for the national championship title since the 1990s.

Wooching’s style of play and aggressiveness has been so intriguing, that many predict he will be a late round pick in April’s NFL draft, an idea that – if it came up a few months ago – would’ve garnered scoffs and even laughs.

But nobody’s laughing now, after Wooching helped the UW Huskies secure the Pac-12 championship title with a lopsided win against Colorado (41-10).

During that game, Wooching made national headlines after he took out three players with one block on a Pick 6 return.

Did we forget to mention that in addition to playing football; Wooching is also a skilled rugby player and an experienced fire knife dancer?

Wooching was a winger for the Seattle Saracens, and during a rugby sevens tournament last summer, he was named tournament MVP.

A young boy from the islands, he is the son of Paulo Luki and Shannon Honan Wooching.

He was described as a “loose cannon”, a kid who grew up not knowing how to speak or read English, and was eventually diagnosed with dyslexia.

He beat the odds and became a leader, someone the squad – and even people in his family – can admire and be proud of.

"God has been his #1 inspiration," said Paulo of his son.

As a show of his strong belief in the Almighty, Wooching has Psalms 144:1 tattooed across his chest: “Praise be the Lord who is my rock, who trains my hands for war and my fingers for battle.”

Following the Huskies loss to 'Bama last weekend, Wooching said during a post-game interview that the loss was 'tough'.

"Just that being the last game of my collegiate career. That just hurts, I guess." He said his final game donning the purple and gold uniform was 'good', adding that he "wouldn't want to lose to anyone else but the best."

As for his future plans? Wooching said he is unsure. “I don’t know. I have no idea. I have two things that I’m kind of looking toward. We’ll see.”

His father Paulo, who grew up as a typical Samoan boy, working on a plantation with his 14 brothers and sisters and living in a small hut in Samoa, couldn't be more proud.

Although they lived off island, Paulo and his wife Shannon raised Psalm and his sister Hero in a strict Christian-based household where respect and discipline were at the forefront.

Paulo always made sure his children knew their roots and taught them the importance of the fa'aSamoa.

"God has been the author of Psalm’s book of his UW journey. The source of all that he was able to do at this amazing university and an awesome football program."

Paulo thanked coach Peterson, his staff, and the University of Washington "for taking in our warrior from the islands. The friends that the Wooching 'ohana have made during this UW journey couldn’t have been handpicked better. Thank you, mahalo, and faafetai lava for all your friendships."

To his son, Paulo said, "Thank you son for allowing us to be part of your passionate journey. We are very proud of all that you have accomplished and mostly for who you are and what you have become. Dawgs future is bright – Go Dawgs. Woof Woof!

Wooching's mother Shannon, through social media, summed it all up by thanking Psalm “for giving us some of the BEST times of our lives.”