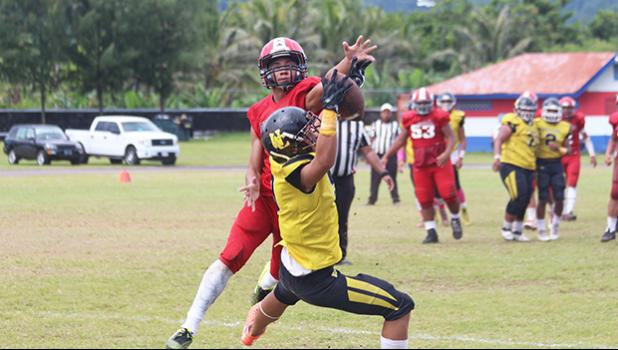 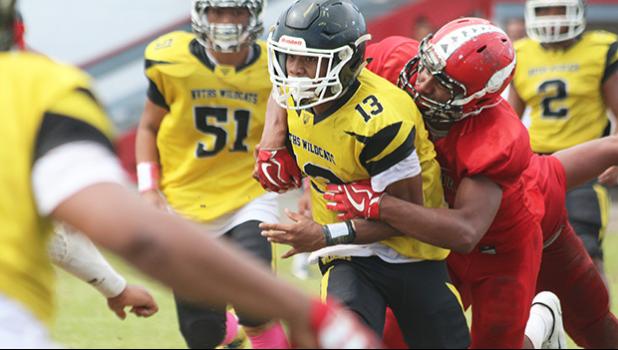 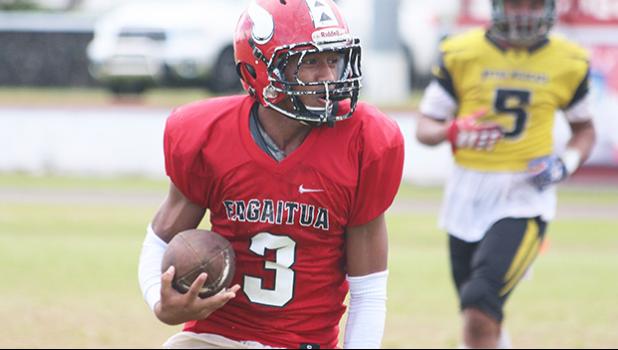 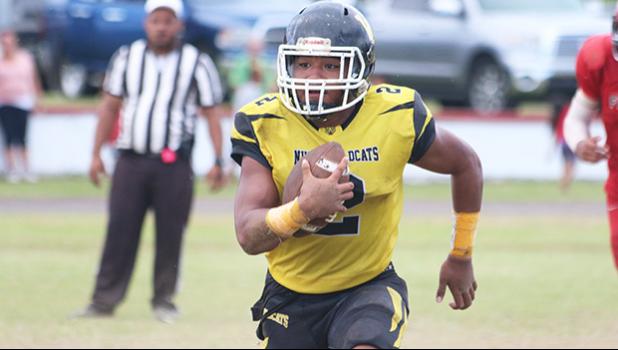 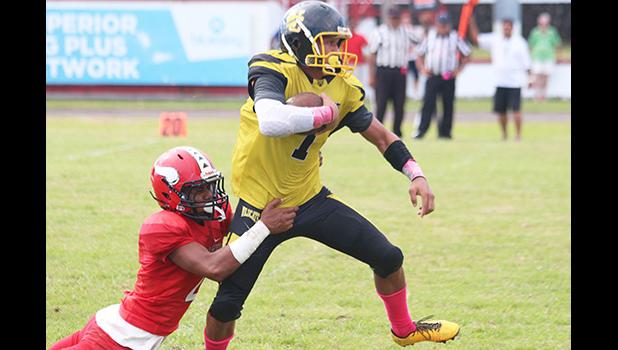 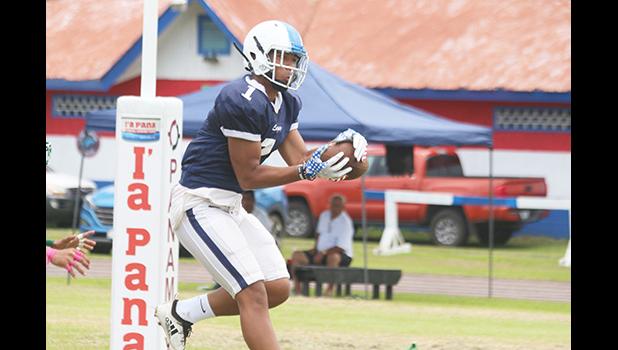 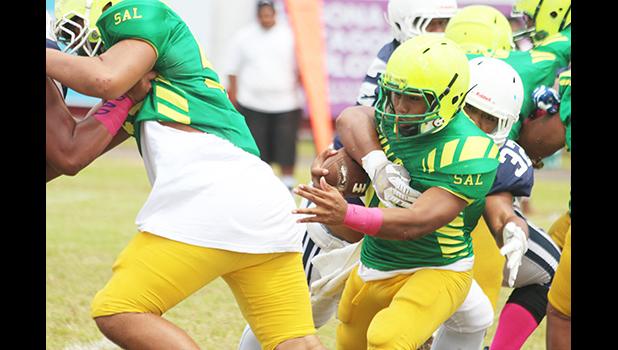 Blue Empire defeats the Kings of the Jungle in the ‘Clash of the Titans’
By
Tony Gasu
tony@samoanews.com

Pago Pago, AMERICAN SAMOA — Head Coach Andrew Ena and his Nu’uuli Wildcats stunned the crowd this past Saturday — they defeated Head Coach Sua’ese Pooch Ta’ase and his Faga’itua Vikings during the Vikings Senior Game, to close off the eighth week of ASHSAA Football action.

In the meantime, Head Coach Pati Pati and his Samoana Sharks claimed victory in their ‘Clash of the Titans’ rivalry game against Head Coach Okland Salave’a and his mighty Leone Lions in both JV and Varsity divisions this past weekend.

From the record book, two years ago, it was the Tafuna Warriors Senior Game that the Wildcats ruined — doing the impossible and defeating the Warriors for the first time ever in the history of ASHSAA Football.

The Wildcats welcomed home their star running back Joseph Mauga from the Youth Olympic Games with a win against the Vikings that sent a message to the league that they are not to be ousted this year, with just two more weeks of regular season remaining.

Although the Wildcats came out victorious, it was the Vikings who drew first blood in this match, early in the ball game, when Vikings back-up quarterback Heinrich Ta’ase, who is playing for the injured Advent Migi who didn’t suit up last Saturday, connected with Steven Fiso twice early in the first half to put the Vikings ahead by 13 points with the help of Manuita Sofeni and his field goal abilities, Faga’itua was looking to put this one away early.

Suddenly, the Wildcats answered moving downfield in a shotgun pistol formation, and were able to maneuver between option quarterback read to the passing game which helped them breach the red zone with 1:22 remaining in the first quarter. Nu’uuli’s first down from the 7-yard line and Jerry Isaako sent Jefferey Tago straight up the middle to score Nu’uuli’s first TD of the game.

The Wildcats first drive of the second quarter saw them taking control of the pace as they didn’t rush into the line of scrimmage, instead they took their time getting the plays from Offensive Coordinator William Lobendahn and pacing themselves to moving the chains downfield. It didn’t take long for Nu’uuli to start knocking at the door from the 5-yard line, as Tago again powered his way up the gut to score his second TD of the game; and Nu’uuli came back to take the lead 14 - 13 after Joe Sava’i crossed the goal line with the two-point conversion.

The next TD was Fagaitua’s third, with Isaako being bombarded by Viking defenders inside the end zone, as he tried to get rid of the ball to avoid a safety, and threw the ball straight into the hands of Faga’itua’s Elive Isaleli who secured the football inside the end zone and scored on a strong defensive effort by the Vikings.

Their two-point attempt saw Manuita Sofeni crossing the goal line with the ball as he extended the Vikings lead 21 - 14.

But the Wildcats come back to show the Vikings that their first two possessions were not flukes, with just 13 seconds remaining in the first half, and Nu’uuli poses a threat inside the red zone – Wildcats second and goal from the 5-yard line, and instead of running it, Isaako looked to PJ Tufugafale and connected for another Wildcat TD coming back to trail the Vikings 21 - 20 into half time.

Isaako and the Wildcats offense shocked the Vikings early in the second half of the match when Isaako took off with a quarterback keeper from the 20-yard line – straight up the middle to score another Wildcats TD to take the lead 26 - 21 to open up the third quarter of action.

Later in the third, with just 3:42 remaining, the Vikings were finally able to answer with a 30-yard reverse hand off play to Chris Olo who stormed his way to the sideline and found an opening to the end zone for his first score of the game as the Vikings came back to take the lead 27 - 26.

Action continued with the Vikings extending their lead 33- 26 when on Nu’uuli’s third down at the 36-yard line and Isaako dropped back to pass, but he was hit hard by Fiso, causing a fumble that was picked up by Fiso and returned all the way back for a 74-yard defensive TD.

But Wildcats answer with an unstoppable option game that would again put the Vikings on edge – 36 seconds remaining in the third and Nu’uuli’s first down from midfield saw Isaako rolling out to connect with Vincent Tulouna on a pass that was hauled in by Tulouna en-route to the end zone for another Wildcat touchdown.

Their two point attempt quarterback keeper by Isaako secured the Wildcats comeback to take the lead at 34 - 33.

The next TD is Wildcats Mauga, breaking two tackles at midfield and juking out two more DBs on his way to scoring with just 32 seconds remaining in the ball game — Mauga has just assured the Wildcats that they will be going home with the win for the first time this season after that 43-yard TD run.

Their two-point attempt was another quarterback keeper by Isaako, which put the Wildcats at 42 - 33.

Faga’itua refused to give up and continued to make every second count, all the way down to the last one – With the clock at zero, the officials decided to play an untimed down due to a penalty that went against the Wildcats when the time ran out, giving the Vikings another shot to score from the 35-yard line, this time, a field goal by the injured Fiso who had been out of the game for the nearly the whole second half, decided to come back and kick a field goal to end the match.

The field goal gave the Vikings three more points to their side of the board, nevertheless, but not enough to defeat the Wildcats, who came out victorious in this one with a 42 - 36 victory, their first win of the season.

The Sharks and Lions rivalry this second time around concluded in favor of the Blue Empire, but it didn’t come easy as the Lions gave them a run for their money – Leone stuck with it all the way to the end until an unfortunate drive ended with an interception by the Sharks assuring Samoana the win.

First blood went to the Sharks with a kick-off received and returned all the way back for a 98-yard touchdown return by Douglas Ausega to take the early six point lead.

It’s followed by a kick off to the Lions recovered by the Sharks inside Lion territory, and with a personal foul penalty against the Lions after Samoana recovered the ball spotted the Sharks a first down opportunity from the 10-yard line. From there, Anthony Feala sent Mahonri Lotulelei up the gut for Samoana’s second TD.

Samoana’s two-point attempt saw Feala dropping back to fire a solid bullet to the hands of Avory Seumanutafa, who secured the catch with both feet in the end zone to put Samoana ahead by 14 points.

Opening up the second quarter of play was Lion’s first TD of the game with an explosive running game by the Lions Irvinson Ta’ase and Fagaloa Faimalo who carried the Lions to the red zone for a successful shot at the end zone.

Tying things up 14 a piece, the Lions Ta’ase rolled out with the play action pass to find Joshua Taani in the end zone for Leone’s second TD, and with a successful two-point attempt, a quarterback keeper by Ta’ase,

Samoana’s third TD comes to fruition with Feala and the Sharks offense deciding to change things up and went to their ‘Air Attack’ — Feala drops back to fire a 43-yard reception to Kobe Lefiti who hauled in that catch en-route to the end zone.

Shark’s defense was turned on after taking this lead, as Liu Motuga and Kidmanshaq Sea led the way for the Sharks to turn the ball over after recovering a fumble at midfield, bringing Feala and his offense out for a first down at the 40 with just 3 seconds remaining in the first half.

From there, Feala looked far to fire a long pass to Paul Fans who caught that pass inside the end zone while fighting off a defender for another Samoana TD as the Blue Empire extended their lead 26 - 14 into half time.

The Lions shocked the Blue Empire with a passing game to open up the second half, as Leone immediately moved the ball to the 9-yard line for a first and goal opportunity – From there, Ta’ase decided to tuck and run and scored another six points for the Lions with just 7:22 into the third quarter of play.

Samoana answers with a long pass play from Feala to Fitu Amata from midfield for a TD that moved the Sharks to a 32 - 20 lead in the third quarter of play.

Leone knew their passing game was firing on all cylinders, as the Lions stuck with it to score another six points – Leone’s second down from midfield saw Ta’ase dropping back to thread a pass to Antwan Legget on a post pattern, as Legget hauled in the pass, broke a tackle and stormed out to the end zone to score, as they inched back to trail the Sharks 32 - 26.

Late in the final quarter of the match, Leone was on a hot streak to try and put this one away; and, the Lions, who were on the verge of scoring with an unstoppable passing game, were stopped when their last play of the game, a pass from Ta’ase intended for Danielson was picked off by Fiso of Samoana, as he brought that interception near midfield to end the ball game, with the Blue Empire winning this one 32 - 26.