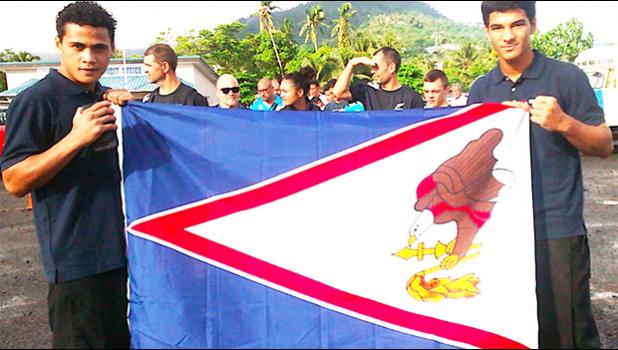 Pago Pago, AMERICAN SAMOA — The American Samoa Amateur Boxing Association (ASABA) is sharing some good news for the community, after one of the two local boxers who competed in the 2018 Oceania Youth Boxing Championships in Samoa two weeks ago qualified for the 2018 Youth Olympic Games in Argentina, October 6-18. The Samoa Oceania championship was also a Qualifier Competition.

ASABA vice president Okesene Malala who took the two fighters to Apia also received a Two-Star Coaching Certificate from the Amateur International Boxing Association (AIBA) two weeks ago. He is the first American Samoan to receive such a certificate.

American Samoa amateur Falaniko Tauta qualified for the 2018 Youth Olympic Games after an outstanding performance in Samoa where two of our local fighters, Tauta and Jolando Taaalo too part in the competition.

In a brief interview with Malala last week, he confirmed the good news for American Samoa and especially for the family of young fighter Tauta.

“The good news for us is that Tauta is now qualified for the Youth Olympics in Argentina this year. I know it’s a hard path but I salute him for his great effort. The road to the Olympics is not an easy one. An athlete must first prove that he/ she can do the job, and after some tough training and sacrificing more time of his life to this sport, Tauta is making his way to the next level and I’m so proud of him,” said Malala.

“I can’t express the joy I feel when Tauta achieves his goals as a boxer.”

Tauta started boxing when he was in elementary school. He began competing at 12 years old with the support of his family, and continued to box until he was considered one of American Samoa’s elite young fighters two years ago.

In December of 2016, Tauta was part of the 10-man squad from American Samoa invited to compete in the Samoa Games Boxing International Championship in Samoa, where he won his first gold media in the middleweight division.

Building up his talents and his skills, Tauta continued to prove himself in boxing, when he won his second gold medal during the Oceania Boxing Championship, again in Samoa in February, of last year, which gave him the chance to be part of the International Training Competition in Australia in April of last year, where he won his third gold medal of his boxing career.

“Boxing is tough but if Tauta does his homework, trains hard and is ready at anytime, then I know for sure that he will do good this year, and I wish him luck,” said Malala.

A letter from the AIBA Executive Director to Paepaetele M. Jamias, President of ASABA confirmed that Tauta will represent American Samoa at the Youth Olympics Games, as well as the World Youth Boxing Championship, to be held in Budapest, Hungary from Aug. 19 - Sept. 01, 2018.

In addition to the good news about Tauta, ASABA vice president Malala also received his Two-Star Certificate in Samoa two weeks ago.

Malala told Samoa News that this is what ASABA and the community want — we need certified coaches with great experience to help us to move forward with our training, and also in promoting the sport in American Samoa, he said.

Speaking to Samoa News via email, President of the ASABA Paepaetele praised the development of boxing in American Samoa.

“This is good news for American Samoa,” Paepaetele said. “We now have an elite local fighter who is qualified for this Youth Olympics Games, on the other hand, Malala has now received his Two-Star Coaching Certificate from AIB. This is a real sign to show that amateur boxing in American Samoa is still moving forward.”

Last Month, according to Paepaetele, a member from the AIBA from Australia, who is in charge of the Youth Championship, which was held in Samoa last week, Garry Moore visited our shore. Paepaetele told Samoa News that Moore’s visit is all part of pushing forward the sport, and to assess the facility where our fighters are training.

When asked whether AIBA is giving ASABA money to help develop the sport, Paepaetele said AIBA does not give ASABA money directly.

“We were given one athlete scholarship for Tauta through our ASNOC (American Samoa National Olympic Committee), but that ended in March of this year. We’re still doing everything we can to make sure these fighters will have good facilities to train in. I leased out Maliu Mai and so it is no longer available. So I am building a new structure for our ring and it is almost finished at Maliu Mai,” Paepaetele said.

“There is no more Amateur boxing in AIBA. We have programs for youth up to 18 years old and then Elite Boxing which is 19 years old and up for the World Series of Boxing and the Olympics,” he concluded.