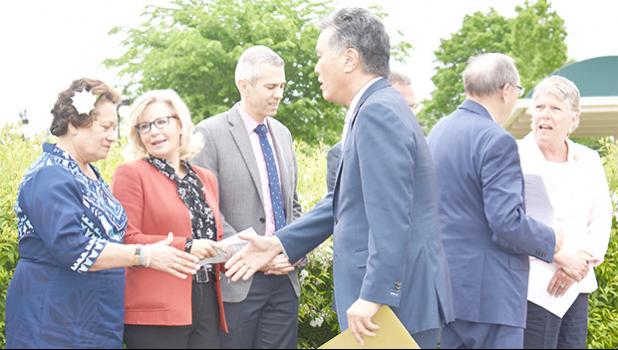 Washington, D.C. — Congresswoman Aumua Amata and the House Veterans Affairs Committee conducted a hearing to examine the Department of Veterans Affairs (VA) efforts to reduce suicide among the Veteran population. Prior to the hearing, Speaker Nancy Pelosi and GOP Conference Chair Liz Cheney joined Congresswoman Amata, Chairman Mark Takano, Ranking Member Dr. Phil Roe and other leaders of the Committee to raise awareness at a Capitol press conference with Veterans.

“It breaks my heart to think of one of our Veterans losing hope or struggling alone,” said Aumua Amata. “The problem of Veteran suicides is a national tragedy, and we must all come together to fight for these precious lives. I appreciate President Trump’s recent Executive Orders, and I appreciate this clear focus in our Committee led by Chairman Takano and Ranking Member Roe, who have a genuine heart for our Veterans.”

Sadly, suicide claims the lives of an average of approximately 20 per day of the nation’s combined Veteran, Active Duty, National Guard and Reserve populations. The VA has tripled mental health care spending since 2005 to a record $8.6 billion in fiscal year 2019, and the President’s budget request for the entire VA would be a new record on support for Veterans.

President Trump has also responded with an Executive Order to create a new task force that will make recommendations on a roadmap to preventing suicide, known as the President’s Roadmap to Empower Veterans and End a National Tragedy on Suicide (PREVENTS). This effort stresses the need for the federal government to work alongside States and Territories, and private/nonprofit organizations. Efforts include better and more timely data.

The House Veterans’ Affairs Committee also held a hearing on this important topic in September 2018, as the VA report was released showing an increase in suicide in both Veteran and non-Veteran populations; however, the Veteran rate was 1.5 times greater than the rest of the population, and women Veterans’ rate was 1.8 times more than women in general. The statistics show that more of these tragedies occur among Veterans not accessing VA care.

“God bless our Veterans, and I’m grateful that the President, Congress, the VA, and many Veterans groups are coming together to make a difference,” concluded Amata.