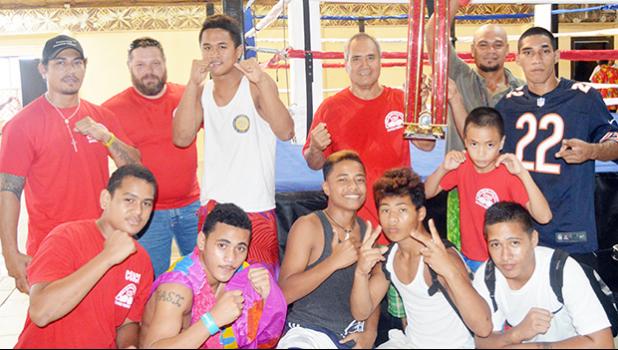 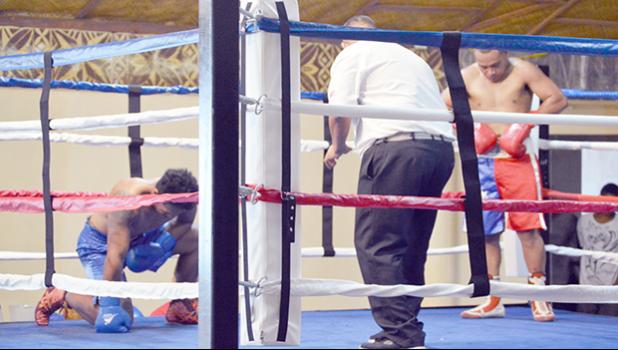 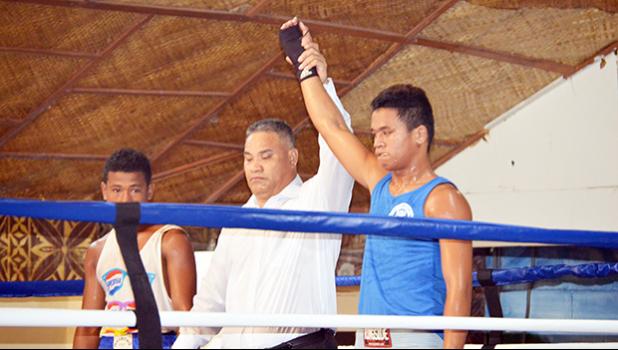 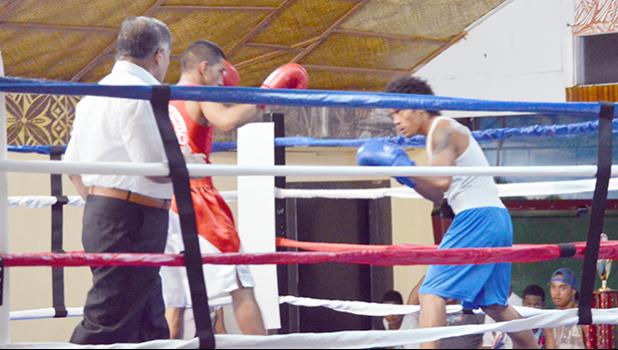 The American Samoa Boxing Federation (ASBF) boxing teams are proud — they defeated the visiting team from Samoa during the “2Samoas Battle” last Saturday at the Maliu Mai Beach Resort to win the Championship Trophy, as well as all of the five special amateur bouts during the International Boxing Championship for this year.

The International Boxing Championship was suppose to take place in April during the American Samoa Flag Day celebration, but due to the busy schedule for both SABA and ASBF, the Championship was re-scheduled to last weekend.

This year, three amateur undercards battled in the “2Samoas Battle”, followed by five special amateur bouts, and the event drew the attention of more than 200 spectators including some tourists, who came to watch some of the best boxers found in both Samoas. Parents and families for all the boxers also attended to support and celebrate their performances.

President of the ASBF, Paepae Mapu Jamias offered opening remarks with a big fa’amalo and fa’afetai to the fans, supporters, especially parents and families of the two boxing teams for showing up to show their support.

“I would also like to thank our coaches and training officials for both boxing teams for making an effort to train our fighters to become good fighters for the future. The only way we can make our teams better is to have money to send our fighters off-island to gain additional training and to get the chance to meet many elite boxers around the world,” Paepaetele said.

“This will be a huge step forward for our young fighters who are now battling for the win today,” he said. “Not only will they get the chance to show they have the talent but it will also prepare them for the next challenge in life”, he said.

Samoa Amateur Boxing Association (SABA) Head Coach/Team Manager, Fataga Leaso Usoali’i Sululoto was in tears when asked by Samoa News about the outcome of this year’s International Boxing Championship between the two Samoas.

“It’s a sad feeling when we didn’t win any bout this year, and despite this year’s results, I have confidence that our fighters will go back home, re-group and come back next year to win this Championship.

“For the winning team, I just want to congratulate Paepaetele and his team for winning all five special amateur bouts for this year. You deserve it, it’s not an easy task to do, because we have to work hard and focus on everything we do to earn the win,” said Fata.

“Congratulation to the Coaches of the ASBF and their fighters for winning their title back-to-back this year, but I just want to assure you that this is not the end of the road, we’re going back home to iron some weakness and we will be back to challenge the power of your team. This is not the end of the world. This is what boxing is all about, your go down today but you will come back tomorrow”, said Fata.

When asked by Samoa News about what areas he’s looking to strengthen after watching all of his five fighters in the ring, Fata said that there’s a lot of work that needs to be done for his team, especially the fitness and defense.

“From what I have noticed today, fitness is the key factor for American Samoa to win our battle, but that was our weakness, also in the defense area, we need to strengthen a little bit more on our defense so that our fighters will be able to be good in that area,” Fata said.

The first match of the Championship was between Ioelu Etuale, 11-year old from ‘2-Low Lava Boxing Club and Peleka Tafa, also a 11- year old from Mapusaga Fou Boxing Club. Both future fighters did their best to entertain the audience with different boxing styles from the first round up to the third round, where Etuale escaped with a split decision when two Judges believed that he did enough to win their fight.

The first amateur special bout of the night was between Jeffrey Tago of American Samoa in the red corner and Samoa’s gold medalist Iosia Fa’alaniga in the blue corner for the 81kg division. Tago is one of the best elite fighters in American Samoa while Fa’alaniga was the Samoa gold medalist during the Oceania Championship last year in Fiji.

In this bout, Tago dominated the first 2 minutes of the first round of the match, throwing some hard punches at his opponent, connecting some good combinations with his double jabs followed by a power right hand to the body and head, which caused Fa’alaniga to fall down with both hands holding his stomach, while the referee counted down, however, Fa’alaniga was unable to continue the fight, which gave Tago a win by TKO.

American Samoa won the second bout of the night with a unanimous decision, when all three Judges agreed that Falaniko Tasi Tauta of American Samoa was too good for Archie Vaiala of Samoa in the 64kg.

Vaiala, Samoa’s silver medalist from last year’s Oceania Championship in New Zealand, was out-pointed by Tauta in the first round of their match, and right through to the third round. Tauta used his height advantage and power to control the fight and score more points in all three rounds.

For the ladies bout, Elisapeta Tuavale of American Samoa defeated Iva Maufouina from Samoa to win her first amateur bout of her boxing career in an unanimous decision.

The fourth bout of the night was the most interesting bout to watch, between Samoa gold medalist Fa’asala Livai and American Samoa gold medalist Kaisa Ioane. Both fighters used their skills and boxing styles by throwing jab after jab in the whole first round without throwing any power punches, but in the second round, Ioane proved why he won two gold medals in the last International boxing championship last year when he controlled his base, connecting his double jabs and landing good body shots, which caused Livai to retreat a little bit.

For the main event of the night, Petelo Matagi of American Samoa was too good for his opponent Tesimale Fatu-Taua’i of Samoa, when Matagi knocked him down in the first minute of the first round of their bout.

In the first minute, Matagi delivered power double jabs followed by a deadly right hand and body shots causing Fatu-Taua’i to fall, and unable to continue — leading to Matagi’s win.

The boxing team from Samoa left yesterday and will plan to meet again in another ‘2Samoas Battle’ during the Mosooi Boxing Championship in October of this year.