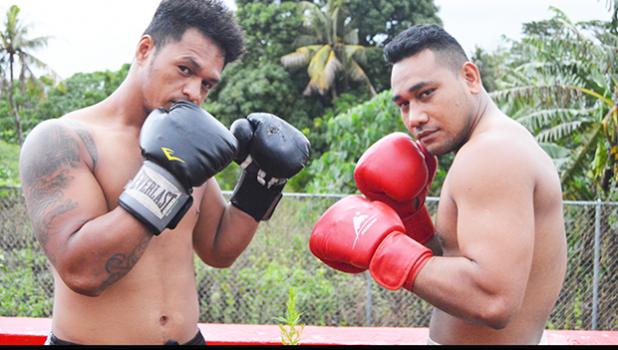 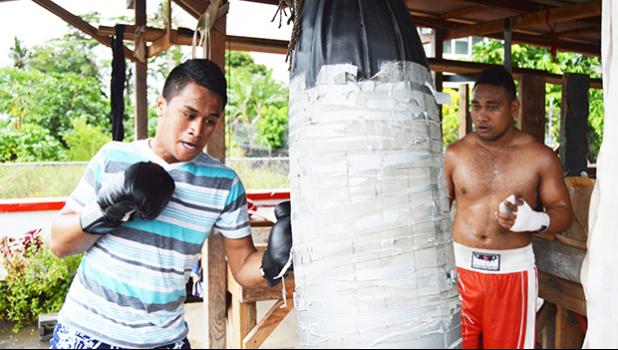 The Samoa Amateur Boxing Association (SABA) will be bringing a team of elite boxers this weekend, to test the skills and the fitness of the American Samoa boxing team during the battle between the two boxing organizations — the SABA and the American Samoa Boxing Federation (ASBF) — for the Annual Flag Day International Boxing Championship, that will be held at the Maliu Mai Beach Resort in Fogagogo on Saturday at 1:00p.m. in the afternoon.

This International Boxing Championship was suppose to take place in April during the American Samoa Flag Day celebration, but due to the busy schedule for both SABA and ASBF — they were preparing their fighters to take part in the AIBA Sparring Session that was held in Australia last month, this Championship was re-scheduled to this coming weekend.

There will be ten bouts for this year’s battle between the “2Samoas Battle”, which include five amateur undercards and five special amateur bouts for the evening, with the main event between Samoa’s undefeated heavyweight Petelo Matagi and American Samoa heavyweight rising star Tesimale Fati-Taua’i.

In an interview with ASBF vice president, Okesene.T Malala told Samoa News that this will be a good tournament for our team, to prepare them for the upcoming Pacific boxing tournament including the Oceania in June of this year.

“This will be a huge step for our young fighters who are now battling for the win this coming weekend. Not only will they get the chance to show they have the talent, but it will also prepare them for the next challenge in life, but for our elite fighters who are in this business for a long time, this will be a good chance for them to prepare them for future tournament such as the Oceania for this year,” he said.

According to Malala, who is also a certified 1-Star Coach, the team that is going to battle with the team from Samoa this weekend is ASBF’s top team, which includes Falaniko Tauta, Jeffrey Tago, Kaisa Ioane and Fati Taua’i.

2016 Samoa Games gold medalist, Tauta is holding an undefeated record in his amateur career. He also won 2 gold medals and a bronze from previous International boxing championship including the 2015 Oceania and the Samoa Games last year, where he won the MVP award. He qualified to the Youth Olympics next year in Argentina after an outstanding performance at the Amateur International Boxing Association (AIBA) International Sparring Competition in Australia last month.

Fighting in the 81kg for American Samoa is Tago, who won a gold medal from the Samoa Games last year in Apia. According to Malala, Tago is one of our young fighters who has the potential and the skills, and he’s confident that he will do well this coming weekend.

For the 69kg division, Ioane will be using this tournament to test his fitness and his skills ahead to the 2017 Oceania Championship in Australia in June. Ioane won 4 gold medals from previous International boxing championships, including the Oceania and the Samoa Games in Apia last December.

“Ioane’s win was his fourth gold medal from the Samoa Games in Apia last December when he knocked out both his last two opponents during the semi final and the final to win the gold for American Samoa. He’ll be representing American Samoa in the upcoming 2017 Oceania Championship in Australia in June, and we are confident that he will do good out there”, said Malala.

For the main event of the night, Fati-Taua’i of American Samoa will be testing the mighty hands of Matagi from Samoa, who is well known in the Pacific for his speed and skills, and also won several gold medals for Samoa from previous International boxing championship.

Matagi is already on island and he’s training together with the ASBF team at their main training spot in Tafuna.

“Fati-Taua’i is not new in the ring, he has power with good skills and he’s fought with some of the good elite fighters from Samoa in many past tournaments and I have confidence that he can counter the mighty hands and the speed of the Samoa gold medalist, Matagi”, said Malala.

Despite Fati-Taua’i never having won a medal throughout his career, Malala still believes that this will be an interesting main event for the night.

“The two fighters have never fought each other before so it will be interesting to see Fati-Taua’i’s power versus Matagi’s speed. Both are young fighters and would use this opportunity as part of their preparations for future tournaments,” Malala said.

“Matagi on the other hand is a humble and soft spoken young man who prefers to let his hands do the talking. He sees a future in boxing and ultimately wants to become World Champion. He will get his opportunity to prove himself that he still has the skills for the sport he loves.”

Matagi made his name well known in the Pacific when he defeated Tongan’s Elite Champion Kanongataa Atonio in the a third round with a TKO to win the “Battle of the Pacific” bout in Apia last year, using his speed and skills to dominate the first three rounds of their 8-round bout in front of more than 2,000 spectators.

Here is the list of fighters for the special amateur bouts.