‘Mua’ back to village of Aua 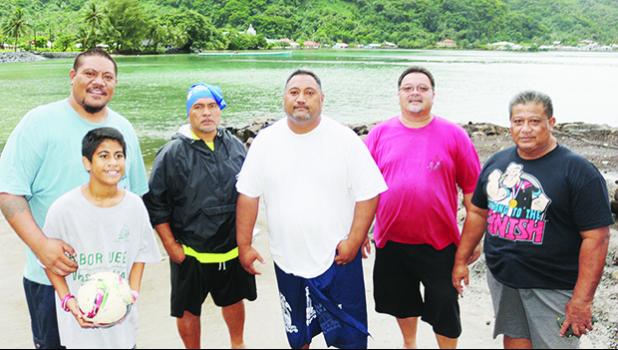 The village of Aua have faith in their taife’au and their aumaga – as they’re focused on one thing and one thing only, the ‘Mua’ to be brought back home to crown their Paepaeulupo’o II who have been noticed throughout the previous fautasi races as one of the most threatening demons to reak havoc in our annual Flag Day Fautasi Regatta.

Matai Taule’ale’a Voloti Malietoa who was the spokesperson on behalf of le Afioga i le Utaifeau Leonard Sonoma – told Samoa News that the Paepaeulupo’o II and its crew are in their tenth week of training and preparations for this years Faigamea i le Tai. Malietoa stated “we also believe that our auva’a have gained the strength and stamina, to power the Paepaeulupo’o II – within the 7 mile destination of a race that was laid out for us by the committee of this years Faigamea i le Tai.”

Malietoa added “I know as of now, the committee still hasn’t confirmed where the actual starting point of the race will be – neverthless, our aumaga and the crew of the Paepaeulupo’o II are continuing to keep up with our usual trainings and fitness activities to maintain the strength and stamina of our auva’a.”

According to Malietoa, the preparations and trainings of the Paepaeulupo’o II and the aumaga from the village of Aua are under the supervision and management of le Afioga i le Utaifeau Leonard Sonoma – who will again be at the helm for the Paepaeulupo’o II come the day of the race.

Elabortaing on the focus and goal for the village of Aua for this years Flag Day Fautasi Regatta, Malietoa told Samoa News “just like all the other crews competing in this years Faigamea i le Tai, we are focused on the ‘Mua’, o le sini o le aumai o le Mua i totonu o le afioaga – overall,our Manulauti or aim for this years race as well is to embrace the bond within the youth of our territory so that they can all get to know each other and have respect for one another.”

He continued “we have a lot of new young youth members that are starting to come out to be part of the aumaga, as well as to being part of our auva’a – some of our experience and old crew members have gone off island for educational purposes as well as honoring their creed as being members of the US Armed Forces.”

Malietoa added “the eldest crew member on our auva’a this year is 45 years old – our youngest rower as of now is 15 years old. We are proudly continuing to see the young youth members of our alalafaga coming out learn the ways of the sport – these are signs improvements within our aumaga and our village – these are also ways of believing that the Aua’s experience within the sport of fautasi racing is still improving and moving forward”.

He continued “I also believe, this goes for all the other competitors and villages and their Sa every year – if not three or four or maybe even five new rowers coming out every year to try out to being part of the crew.”

In addition, Malietoa wanted to express his wishes of good luck and blessings on behalf of the village of Aua – to the committee of this years Flag Day Fautasi Race, he stated “  the rules and regulations of the sport have already been laid out there for us, as it usually is every year. And the advice of the committee that is always being reminded to us every year, is that the turnout of the race is all in the hands of the skippers and captains’.

He continued “this is the same question every year – is the committee right, or is the captain and his auva’a right – because if something comes up, the committee will always argue that they’re right – at the same time, the villages aren’t letting down, as they too are emphasizing that the captain and their auva’a are right” referring to the results and decision making within the past years of Fautasi Racing in the territory”.

Malietoa concluded “e le gata i lea o le sapasapaia mai fo’i o si o matou nu’u. Not only here in Tutuila, but abroad as well – the sons and daughters of Aua who are praying and cheering for the Paepaeulupo’o from afar. We are still continuing to see the support from them off-island, on our Paepaeulupo’o II Facebook Fan Page that is actively ‘the’ source of communication that the auva’a and our aumaga are receiving thoughts of good luck and blessings from our families and village members around the world”.

Malietoa concluded “last but certainly not the least, is my sincerest thank you to our committee members who have had our backs from day one of our preparations – Mulitalo Tony Hisatake, Toelafo Sonny Sauafea, Moeimalo Sierra Sappa, Isaia Ice Lirufau, Fred Burgess, as well as Salesi Talauega.”