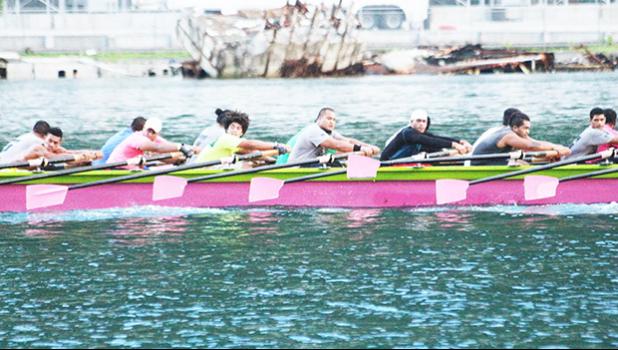 The “God is Great” fautasi rowed by Pago Pago aumaga took first place in the friendly race, followed close behind by “Sinapioa” fautasi representing Sua & Vaifanua counties, rowed by mostly students from Fagaitua High School; and in third place, Manulele Tausala II, which was rowed by young men from Nu’uuli.

The friendly race was originally scheduled for 8a.m. Thursday, but was canceled due to rough waters, which caused damage to the older “Iseula O le Moana” of Fagatogo. The race was rescheduled to being at 1p.m. without the Fagatogo fautasi.

With calmer seas than earlier in the day, the friendly race got underway at 12:46 p.m once all fautasi were in line and the horn from the MV Manu’atele was sounded signaling the start of the race, which began just outside the entrance into Pago Pago Harbor.

Sinapioa crew did well at the outset of the race, as it battled with Pago Pago, which then took the lead, as the race took the curve off the old rainmaker hotel

Fagaitua high school students didn’t hold back, forging forward, with the youngsters digging their oars into the clam harbor waters as they fought to get to the finish line.

And it was a race to see between high schools student rowing the Sinapioa fautasi and the Pago Pago aumaga rowing God is Great.  The Sinapioa crew didn’t give up easily — trying to catch up with God is Great, with parents and supporters of Fagaitua High School cheering from the shoreline.

Flag Day Committee is keeping a close lid on the monetary pizes for the fautasi race with no one hinting to the amounts. The prizes probably won’t be known until  Monday, Apr. 17, at the 2017 Flag Day celebration at Veterans Memorial Stadium.

Samoa News will update this story online if new information becomes available, and for sure on Saturday with results from the final fautasi regatta.