Tulsi Gabbard to announce that she is running for president 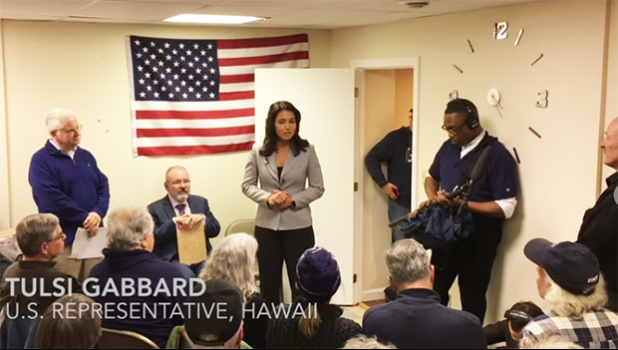 Honolulu, HAWAII — U.S. Rep Tulsi Gabbard told CNN Friday that she is running for president in 2020 and will make a formal announcement next week.

The Hawaii Democrat disclosed her plans on CNN’s “The Van Jones Show,” which will air at 2 p.m. Saturday in Hawaii, the network said.

Gabbard has made recent trips to New Hampshire and Iowa, and had acknowledged she was considering a run for president.

In a statement issued this evening from her campaign at tulsi2020.com, she said, “There are many reasons I’m offering to serve you as President — to ensure every American gets the healthcare they need, to bring about comprehensive immigration reform, to make sure we have clean water and clean air for generations to come, to fix our broken criminal justice system, to end the corrupt influence of special interests in Washington, and so much more.

“But the main reason I’m running has to do with an issue that is central to the rest — war and peace.”

Gabbard, 37, has made several other recent moves that pointed to a possible presidential run. She paid $10,000 to Joe Trippi &Associates, a political strategy firm that has worked on high-profile campaigns, according to reports filed with the Federal Elections Commission. She also paid Batrice & Associates $9,000 in August. Rania Batrice, who has worked with Gabbard in the past, is a well-known political consultant who assisted with Vermont Sen. Bernie Sanders’ 2016 presidential campaign.

She also plans to release an autobiography in the spring, which is common for presidential hopefuls.

Political analysts told the Star-Advertiser that Gabbard’s bid would be a long shot and she may be in part hurt by being from a small state, but that a run could also boost her national profile, bolster her attractiveness as a vice presidential candidate or help her secure a Cabinet-level position.

Gabbard, who was born in America Samoa, was the first Hindu elected to Congress when she won her first race in 2012. Before that, Gabbard served on the Honolulu City Council and in the state House.