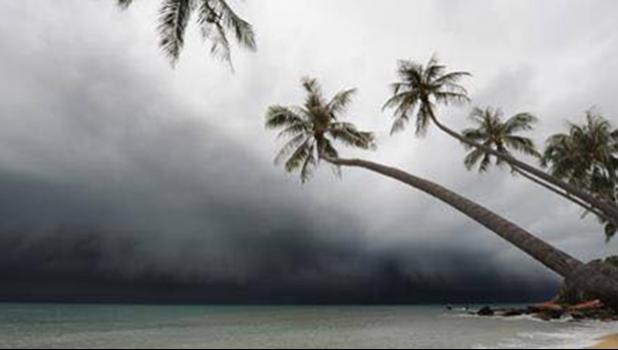 Thousands of people hunkered down in Tonga are being badly battered by Tropical Cyclone Gita.

Fiji's Met Service said the category four storm was very close to being upgraded to the highest category, five.

It has already washed out building and equipment of Tonga's met office, and Fiji weather forecasters took over issuing warnings for the region from shortly before midnight.

The Fiji met service reported the cyclone was 30 kilometres south south east of Tongatapu at 11pm and moving west northwest about 30 kilometres an hour away from Tonga.

Hundreds of calls for help

Graham Kenna, from Tonga's National Emergency Office, said it had been a rough night.

"There's a lot of damage in the city. We know that one of the Catholic churches is completely gone and others are damaged. We've had hundreds of calls during the night for assistance required for trees down on houses and people trapped in houses."

He said it had been too dangerous to get out and a lot of debris was lying in the streets of the capital.

He said roof sheets had been flying, smashing into cars, houses and office buildings.

Mr Kenna said a curfew was expected to remain in place tomorrow.

He said staff of the National Emergency Management Office would get out as soon as possible to free trapped people, look at the damage and do assessments in order to distribute aid.

"I've had phone calls through the night from people who were trapped and wanted help and we just weren't able to offer. We couldn't put lives at stake to go out in such atrocious weather."

Mr Kenna said the New Zealand and Australian governments had emergency supplies on standby and emergency funds were available.

"We can hit the ground running. We're just dividing up our teams now so that as soon as we can get out there, we're out doing an assessment..

"We'll start in the city and then we'll fan out into the countryside and get a full grasp by mid afternoon on what the needs are going to be," Mr Kenna said.