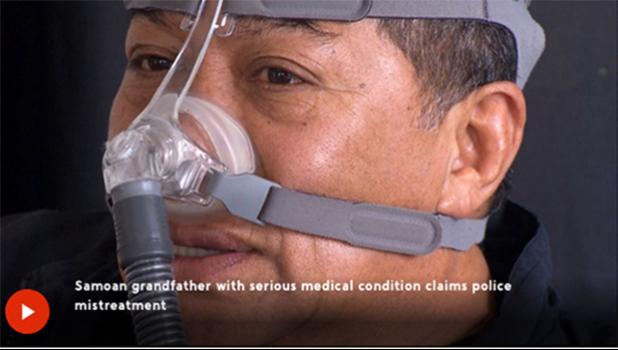 1 News Pacific
A Samoan grandfather with a serious medical condition is claiming excessive physical force and mistreatment by police 15 months ago has damaged him physically and mentally.

Auckland, NEW ZEALAND — This week police told 1 NEWS they have launched an internal investigation over the incident involving Feleti Key as well as referring it to the Independence Police Conduct Authority (IPCA).

Mr Key has been diagnosed with very severe obstructive sleep apnoea since 2005 and struggles with tiredness during the day.

In an exclusive interview, he said he had been playing in a band at a formal Samoan function on March 8 last year then went with his fellow band members to a nearby nightclub.

He had two beers before tiredness hit and when he couldn’t get hold of his family to pick him up, he slept for two hours in his car before waking up gasping for air.

“I decided to drive home as I cannot sleep without the machine to open my airway,” he said.

Driving really slowly, but dangerously according to police, Mr Key was pulled over by a passing ambulance and the police were called.

He says he refused to be breathalised or blood tested for alcohol, instead requesting his lawyer.

Mr Key was put in handcuffs where according to police he kicked an officer – but Mr Key says he was struggling to get air and panicked.

“I was trying to explain to them that I can't breathe,” he said.

“They drag me and push me in car and when they got me in the car the last thing I remember when I say 'I cant breathe' with my face on the seat and I feel like someone sat on me to hold me down.”

The police summary of facts backs up Mr Key’s claim that he refused an evidential breath test and a blood sample.

However, the breath & blood alcohol procedure sheet says the complete opposite - that he did have a breath screening test where he was recorded as blowing over the limit. It also says he had an evidential breath test.