Samoa out but they won't lie down 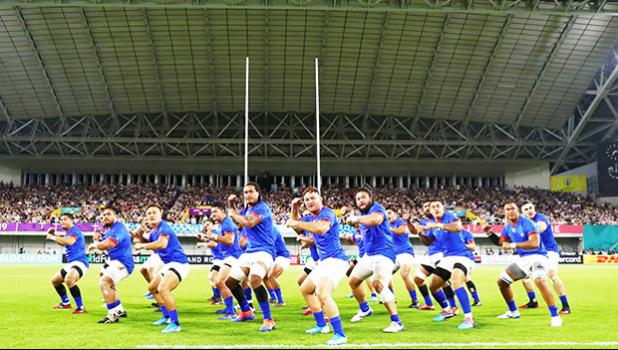 Source: Rugby World Cup news
Despite missing the cut for the knockouts, assistant coach Al Rogers says his team are still motivated to upset Ireland in their final Pool A match.

Nagoya, JAPAN — Samoa insists they are still "hugely motivated" for their final pool match against Ireland despite falling short of the knockout stage at Rugby World Cup 2019.

Japan's 38-19 victory on Saturday means Samoa will not make the last eight for a sixth consecutive Rugby World Cup.

"It's hugely important," said Samoa's assistant coach Al Rogers. "It's the last game for us and a massive opportunity to be able to play against Ireland - a Tier 1 nation - and to show that we are improving and that we are able to build and improve week to week.

"The boys will be hugely motivated because it's the last one and we've got nothing to lose, so we will be looking forward to the challenge."

The City of Toyota Stadium erupted when Japan's Kotaro Matsushima scored a last-second try against Samoa to earn the hosts a bonus point.

That took the Brave Blossoms's tally to 14 at the top of Pool A, ahead of Ireland on 11. Scotland, on five points alongside Samoa, still have a game against already eliminated Russia on Wednesday before facing Japan next Sunday.

Samoa believe they can shock Ireland just like Japan did, which could allow the hosts and Scotland to reach the quarter-finals.

In this tournament, anyone can beat anyone on a day," Rogers said.

"We feel that we started well against Russia, took a bit of a back-step against Scotland and then, with the short turnaround, put in a good effort against a dangerous Japanese team.

"This last week, due to the week that we've had, is a great opportunity for us to embed the learning and put in one last performance that the fans and the country are really proud of."

The Pacific Islanders, No.15 in the world, had responded well after their 34-0 defeat against Scotland on Monday and kept Japan under pressure throughout the game, restricting them to a 26-19 lead until the hosts grabbed two late tries.