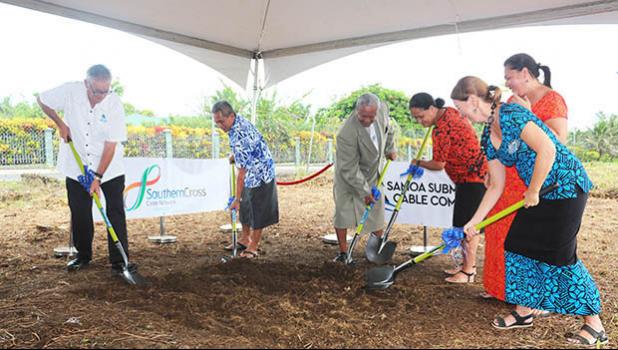 “The Tui-Samoa ground breaking also signals Samoa’s intention to become a hub in the region by also announcing its partnership with Southern Cross Networks,” according to a statement released by the Samoa Submarine Cable Company. The company broke ground for the commencement of civil construction of the cable landing station at Vaivase-Tai on Monday.

“The Government of Samoa through the Samoa Submarine Cable Company (SSCC) formally announced its commencement of commercial negotiations to host a spur of the 12,500km Trans-Pacific Southern Cross Next connecting Australia & New Zealand (and also Samoa) to the Los Angeles in California, USA,” the statement says. “Tui-Samoa cable is an eight-terabit system, which will connect Samoa (Upolu and Savaii), the Territories of Wallis & Fatuna and Vanua Levu to Suva on the Fiji mainland.”

The statement said during the groundbreaking ceremony, Deputy Prime Minister Fiame Mataafa Naomi said it is the beginning of “an important step towards positioning Samoa as a submarine cable hub in the region and will further enhance the prospects of winning the rights to also land the Pacific Connectivity Project submarine cable from Tahiti at this cable landing station.

She said, “the Government of Samoa and SSCC look forward to working with Southern Cross Cables to be your reliable and trusted partner and to fulfill our ambition to be the cable hub for central Polynesia.”

The Chairman of the SSCC and  Anthony Briscoe CEO, of Southern Cross Networks also spoke during the event, both saying they are committed to delivering fast, reliable and affordable internet services as a basic right not only for Samoa but across the region, as well as working “with Samoa as a hub to help them enhance broadband connectivity for the Region.”

The event ended with Fiame thanking Samoa’s development partners – the Asian Development Bank, the World Bank and the Australian Government for their support of the project as well as the SSCC equity investors, and the Southern Cross Networks for the opportunity to develop Samoa as a hub for the region.

According to the press release, SSCC is a private company registered in Apia Samoa, which will build, manage and operate the Tui-Samoa submarine cable between Apia Samoa and Suva Fiji on behalf of the Government of Samoa. The main trunk will support branching units to Wallis & Futuna and Vanua Levu, Fiji.