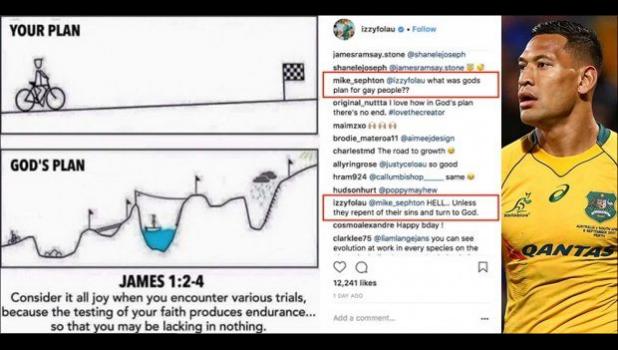 Auckland, NEW ZEALAND — There have been a range of reactions from New Zealand's Pacific community over anti-gay comments made Australia's highest-profile rugby player, Israel Folau.

The former Mormon-turned fundamentalist Christian, who is of of Tongan descent, ignited intense debate after a social media post saying all gay people would end up in hell if they don't repent.

The sports star's comment on Instagram two weeks ago sparked a public backlash in some circles, for others he's also gained some support for speaking out.

His wife, Silver Ferns netballer Maria Folau, is among those publicly supporting her husband's comments, although she came in for strong criticism herself for doing so.

Others like Bishop Brian Tamaki and his wife Hannah, who have a high proportion of Pacific and Māori parishioners, shared their support of Israel Folau on Twitter.

But the president of Tonga's Fakaleiti Association, Henry Aho, says Israel Folau's statements are hurtful and can cause harm. He says a lot of young people consider the sports star a role model.

He says he's grown up accustomed to such comments and treatment, but it is not okay.

"Let's be more tolerant and accepting of each other and, boy we will be better off."

FAFSWAG is a well known collective of queer indigenous creatives founded over five years ago to create an empowered space for queerness, and one of its members, Tanu Gago provoked debate when he called out Pacific leaders.

The Pasifika Advisor for the New Zealand Human Rights Commission Tuiloma Lina Samu says in this day and age Israel Folau must be called out for his comments.

She says that while many in the Pacific community do attend church and follow similar faith beliefs, what he said can't be tolerated.

"In 2018 intolerance against people who identify as rainbow, gay, bisexual or transgender even our faafafine, fafatama, our akava'ine, fakaleiti, fakafaafine communities, it is not acceptable and intolerance and speech that could be very hurtful has to be challenged."

Auckland-based Reverend Mua Strickson-Pua expressed deep disappointment, and has spoken out strongly against the rugby star's take on theology.

He says Christians have a responsibility to be aware of the type of world we live in and how best to practise one's faith and that Jesus died on the cross for all people, not just a chosen few.

"That it is not about condemning people or putting them in a box or sending people to places called hell. It is about how do we actually live the practise of our faith, the examples of our saviour? " he said.

The All Black great Sir Michael Jones, who is well-known as a devout Christian, says he counted Israel Folau as a friend but felt his comments about homosexuals are misplaced and personal beliefs should be expressed with "love and grace".

Rugby Australia this week chose not to sanction Israel Folau over his views even though some sponsors threatened to withdraw their support.

The Australian rugby star published his thoughts in an article this week articulating his beliefs and to provide some context of his earlier post.

He said during a meeting with Rugby Australia that it had never been his intention to hurt anyone with the Instagram comment, but that he could never shy away from who he is, or what he believes in.

Since his social media posts were publicised, it has been suggested that he is homophobic and bigoted and that he has a problem with gay people - but says it could not be further from the truth.