No new measles deaths in Samoa in past 24 hours 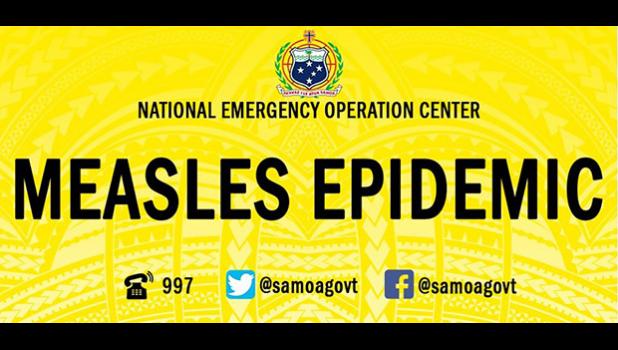 Apia, SAMOA — The Samoa Ministry of Health says there have been no new fatalities due to measles in the past 24 hours.

The death toll since the outbreak began in October was 81, the ministry said, with the two most recent deaths officially reported on Christmas and Boxing Day.

A total of 5634 measles cases has been reported so far, with 22 in the past day.

The number of people with measles being admitted to hospital in Samoa has fallen, with 46 in-patients, including nine children in intensive care.

As of Christmas Day, about 95 percent of all eligible people in Samoa had been vaccinated against measles.

They had been detected after health officials heightened surveillance due to the outbreaks around the region.

In Fiji, the Ministry of Health and Medical Services has advised that the national measles campaign has been temporarily suspended due to the adverse weather effects of Tropical Cyclone Sarai.

Fiji has had 25 cases to date.

In the Marshall Islands, entry and exit requirements have been tightened after the confirmation of measles cases in Kiribati and Hawaii, as well as the ongoing spread in the south Pacific.

The updated travel advisory requires that all Marshallese citizens and foreign residents from six months to 62 years of age traveling internationally must have written proof that they have an up-to-date measles vaccine or an exemption in writing from a doctor.

Incoming passengers in this same age group, both Marshallese and foreign residents, must likewise show proof of measles vaccine to United Airlines and Nauru Airlines to board flights to Majuro or Kwajalein.