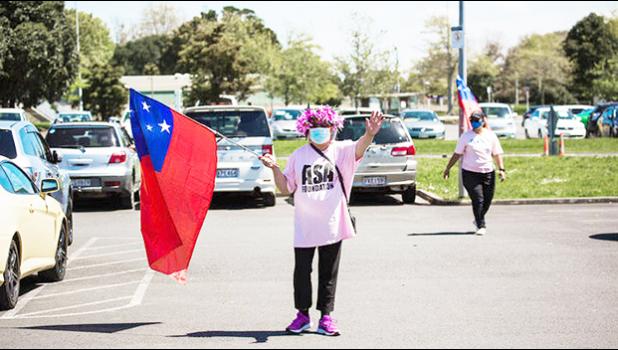 Auckland, NEW ZEALAND — There was a street festival vibe to many Pasifika-organized Vaxathon events around New Zealand on Saturday.

Thousands of Pacific people have taken the chance to be vaccinated against Covid-19 - with organisers going out of their way to make many events as much fun as possible.

In Onehunga at the Langimalie Supervax Event long queues of cars held occupants waited to be vaccinated, while outside people danced in the streets, waving Tongan flags, and brightening the mood of all those around them.

The Tongan Health Society chief executive, Dr Glenn Doherty, said they were giving 100 vaccine doses per hour at the event.

In Ōtara, while the vibe was more chill, long lines still snaked slowly around the MIT carpark as large numbers waited for their doses.

The Samoan flags were waving at the Super Saturday vaccination event at the Browns Road netball courts in Manurewa, with those turning up getting a dose of Siva Samoa with their vaccine.

The Samoan community there gave out food parcels, sanitary products and petrol vouchers.

In Māngere, at the LDS church on Robertson Road, it was all about Kuki Airani culture.

The 'Do it 4 the East' youth-led vaccination event in East Porirua's Cannons Creek featured live music and performances, raffles, food and basketball.

In the South Island, members of the Nelson Tasman Pasifika Community Trust were at the whānau day at Nelson Intermediate School.

Around 100 people there had received the Covid-19 jab by midday.

Nelson Tasman Pasifika Community Trust chair Sonny Alesana said reaching out on social media is helping to boost the number of Pasifika vaccinated in the top of the South Island.