Man sets fire to gas station, kills his wife and takes his own life 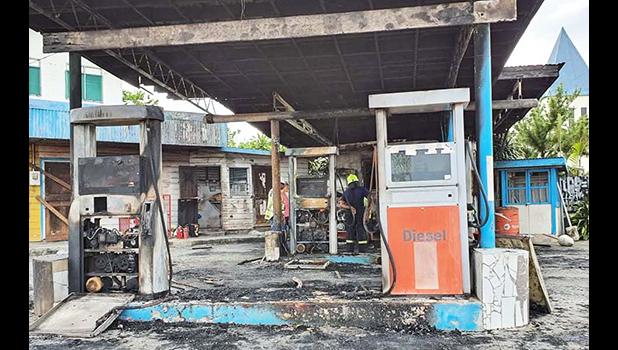 Apia, SAMOA — A man set fire to the Apia Maroon petrol station Saturday afternoon (Samoa time), then stabbed and killed his wife before taking his own life in Samoa’s latest horrific incident of domestic violence.

Witnesses say the couple had been arguing for quite some time before the incident elevated to the man setting fire to the back office of the petrol station located next door to the Ligaliga funeral parlor in Apia.

He then chased down his wife who witnesses say tripped and fell infront of the Ligaliga building next door. While on the ground, witnesses say the man stabbed his wife in the chest area with a knife and left her lying on the side of the road.

Inappropriate footage of the young woman’s deceased body have circulated on social media since the incident showing her bloodied chest area. Various footage had been filmed and uploaded by cars passing by the scene of the crime.

The body of the man was later found by police inside the Anglican church compound behind the petrol station. He is believed to have taken his own life.

A National Inquiry into family safety in Samoa found that over 80 percent of women had been physically or emotionally abused in their lifetime by an intimate partner. Women reported experiencing kicking, punching, slapping (86%), threats of physical violence or bodily harm (87%) and strangling (24%).

Last year in Samoa the Courts dealt with a government CEO who was killed by her husband, and a member of Samoa’s Institute of Accounting who had been shot in the face by her partner.

If you or someone you know is being threatened with physical or emotional abuse, please contact the Samoa Police Domestic Violence Unit on Ph: 22222 or Samoa Victim Support Group Hotline on 800-7974 or 7776609.