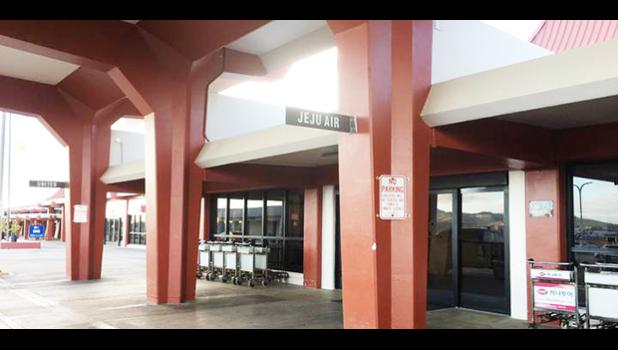 The Northern Marianas, a US territory in the North Pacific, is meant to be humming at this time of year. March is normally the height of the visitor season, with tens of thousands of tourists flying in from three big markets: China, South Korea and Japan.

But as these countries have been gripped by the coronavirus Covid-19, the Marianas' tourism-dependent economy has crumbled. Tour groups and flights from China have stopped altogether, numbers from South Korea have shriveled.

"Tourism is the only economy here," said Gloria Cavanagh, a resort owner and the chair of the Marianas Hotel Association. "It is a huge crisis here."

While no cases of Covid-19 have been confirmed in these Pacific countries, the effects of the reductions in tourist numbers, a lack of airfreight, and a withered supply chain are already hitting several countries hard, with grave fears about how fragile economies would weather a prolonged outbreak.

It's also forced countries into the position of isolating themselves for public health at the expense of the industries on which they are most dependent.

To offset the arrival of the coronavirus, most Pacific countries have imposed strict border controls. Vanuatu, New Caledonia, French Polynesia, and Tonga have brought in health checks and turned away cruise ships in recent weeks.

At a news conference, Cook Islands Prime Minister Henry Puna said 11 cruise ships would be prohibited from the pa enua - the outer islands - in the next two months and travellers from 16 countries would be banned from entering.

Each cruise ship arrival brings in hundreds of thousands of dollars, but Mr Puna made no apologies, saying the government would not compromise the well-being of its people for economic gains.

"The world doesn't have anything to counter it with - that's what makes it so serious," Mr Puna told the news conference. "It's everything to do with what is best for this little paradise."

But some of the strictest measures are in Samoa, which was devastated by a measles epidemic which arrived in November and swept through the country killing 83 people, mostly children.

As of Thursday, all people entering the country - including returning Samoans - needed a medical certificate. All cruise ships were banned, the number of flights to the country had been slashed, and no planes bigger than an A320 or 737 were allowed to land.

The chief executive of the Samoa Tourism Authority, Fa'amatuainu Lenata'i Suifua, said while he understood and supported the government's actions, especially in the wake of the devastation wrought by measles, the country's biggest industry was in for a tough time.

"It's quite a really big impact as we have more than 5000 employees in the industry as well as supporting services," said Fa'amatuainu. "We're trying as much as possible to keep the industry afloat."

In the measles epidemic, hundreds of holiday bookings were cancelled, and the economy was kneecapped when the country was effectively shut down so authorities could wrestle to contain the outbreak.

"For the last quarter of the financial year, we're expecting a 20 to 25 percent drop in terms of the arrivals as well as the earnings from the industry," said Fa'amatuainu. "So it's quite a really big impact."

Fa'amatuainu said people were only starting to make bookings again when Covid-19 emerged and now things were heading back to square one, a devastating regression for an industry which, until October, had recorded year-on-year growth and was about to launch a new marketing push in Asia.

"A lot of the hotels, a lot of the properties have already reported cancellations as well as a decrease in terms of the bookings and sales," he said.

Neelesh Gounder, an economist at the University of the South Pacific in Suva, said the coronavirus outbreak was rapid, and there was still not enough data to quantify what the overall impact on the region's economies would be.

But he said a negative impact was almost certain, with uncertainty already eating into tourist numbers, the flow of goods and business from China, Australia and New Zealand, and the flow-on effects from any global slowdown.

If the outbreak was prolonged, Dr Gounder said it could possibly affect island countries' wider economic relationships with China, including aid projects and the grand Belt and Road initiative, where projects have already been hit by delays and quarantine measures preventing Chinese laborers from reaching building sites.

While the South Pacific may have been relatively sheltered from the outbreak in China, concerns had mounted now the virus had arrived in Australia and New Zealand.

"We now cannot say that the Pacific is really not going to be largely impacted," said Dr Gounder, who added that how much the Pacific is impacted by Covid-19 will come down to how the region's two big economies handle it.

In New Zealand, where the measles epidemic in Samoa originated, foreign minister Winston Peters said in a statement that the government was partnering with Pacific countries to ensure they were prepared for, and able to respond to, the threat of the coronavirus.

New Zealand and Australia would jointly fund the World Health Organisation's Pacific coronavirus response plan, Mr Peters said, and it would test samples from the region free of charge.

But north of the equator, things were already dire. In late 2018, the Northern Marianas was devastated by Super Typhoon Yutu, which struck the island chain - including Saipan - with winds as high as 280 km/h, killing two people and damaging most buildings.

Gloria Cavanagh, the chair of the Marianas Hotel Association and owner of Pacific Islands Club Saipan, said her resort had only reopened to full capacity late last year after the damage sustained in Yutu.

Then, when the coronavirus broke, Beijing suspended all tourist excursions, and South Korea declared quarantine zones, with many others opting to stay at home.

For the Northern Marianas, that spelled disaster. Fifty percent of the territory's visitors come from the Korean market, and 40 percent come from China, according to figures provided by the Saipan Chamber of Commerce.

"When the Chinese market cut all their flights, almost half our island's revenue disappeared in a week. Now that the Korean market is afraid to travel, we've lost nearly the entire tourist industry in the span of six weeks," the chamber's president, Velma Palacios, said in an emailed statement.

Ms Cavanagh said in six weeks, occupancy numbers at her resort had plummeted from 95 percent to 23 percent. Three of the five on site restaurants had been closed, she said, and staff hours had been reduced.

"Hotels are shutting down different sections, they're cutting back on services," said Ms Cavanagh. "It's really hit very hard and it doesn't look like we're going to be turning this around any time soon.

"It's just a matter of survival," she said.

On Friday, the territory's labor department said about 1000 workers had been laid off, while thousands more had had their hours reduced. The government had revised its annual budget down to US$90m, from $147m earlier this year. In 2018 - the last before Typhoon Yutu - the budget was $237m.

The government had already announced harsh austerity measures which include slashed public sector pay and working weeks, and on Wednesday, it was announced that public schools would only be open four days a week.

Among the measures being considered to help the ailing economy was buying public debt, an economic stimulus package, and encouraging US Navy ships to stop by for rest and recreation visits.

In a letter to US president Donald Trump asking for federal help this week, Northern Marianas governor Ralph Torres said the loss of the tourism market would result in the "unequivocal and complete collapse of the foundations of our private sector on the islands".

But Ms Cavanagh didn't have much faith that help would come from Washington anytime soon.

"Pretty much it's CNMI on its own right now," she said, using the acronym of the territory's full name, the Commonwealth of the Northern Marianas. "We're so far away and so remote from the mainland that, you know, it's not an immediate concern for many people."

"It might take a while for them to understand the crisis that we're in, so I'm not looking at actually getting help soon," she said, before adding, "hopefully I'm wrong."