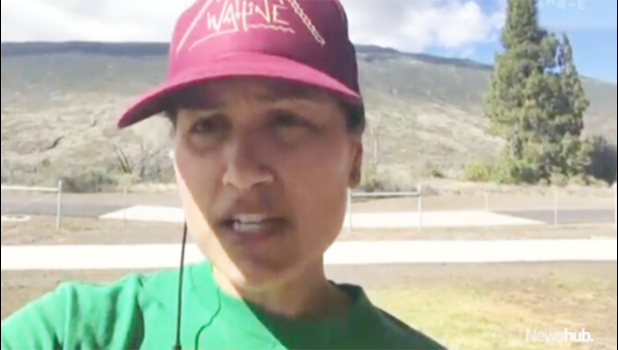 For the seventh day, protestors have occupied the site of a planned giant telescope atop Hawaii's highest mountain, which is considered sacred.

Many Maori in New Zealand have also come out in staunch opposition to the 30-metre, $US1.4 billion project.

In Auckland's Aotea Square this evening, protestors wore red and yellow and clutched Hawaiian flags, among them Mera Penehira.

"I think it's really important that as people of Polynesia, that as Maori, we come out and we support Kanaka Maoli on these kinds of issues," Ms Penehira said.

"It's critical in this day and age, that as indigenous peoples we band together globally to support each other and the protection of our sacred lands."

Momoa has thrown his support behind the movement.

A group of an estimated 1200 people have been blocking an access road to the mountain as they attempt to stop the construction of a 30-metre telescope on the Big Island.

Among them is a Victoria University Pacific Studies lecturer, Emalani Case. Case, who grew up near the mountain, has flown home to stand with her people.

"This isn't a new struggle, we've been struggling against telescopes on the mountain for decades now," Case told Newshub.

The mountain is where native Hawaiians connect with their Gods.

"The destruction that they're going to do to our most sacred place in order to build that telescope is immense," says Case.

"For us, as people who connect to this mountain genealogically and believe it to be an ancestor, that is the ultimate disrespect."

But to astronomers, the mountain is one of the best places to observe space. At 4000-metres above sea level, it is the highest point in Hawaii.

The $2 billion observatory would allow astronomers to look back to the beginning of the universe - but hundreds of scientists have sided with the locals, signing a petition opposing the telescope.

Case says it has touched a nerve with indigenous people around the world who struggle to protect their sacred places.

"Why are we spending all this money and time on a telescope when we really need to be taking care of our earth?" she says.

Kiwis are also flying the tino rangatiratanga flag at the protest, in anticipation of the rally held in Auckland on Monday.