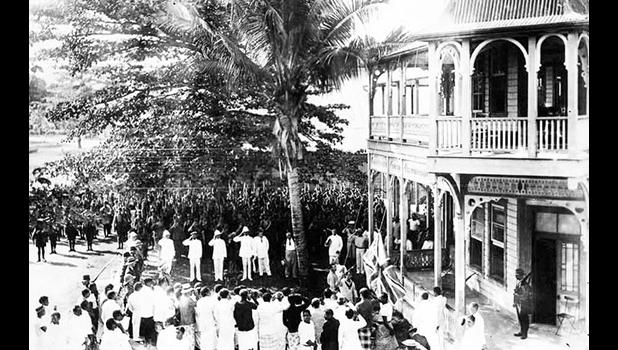 Apia, SAMOA — Samoa's government has started the demolition of a more than 100 year old building seen by many as a historical relic worth saving.

The old courthouse was built by the German Administration in 1902.

It later became the seat of power for the newly established independent Samoa government in 1962.

For 25 years the building housed the Supreme Court and the Ministry of Justice as well as the offices of the Prime Minister and Cabinet.

But the building is most remembered by Samoans as the site of the killing of the Mau leader, Tupua Tamasese Lealofi, shot by New Zealand troops in 1929.

The building became dilapidated over the years, although there had been many efforts to try and rebuild it to its former glory but costs proved to be an issue.

Private organisations were formed to try and save the building, some even approaching the German government for assistance, but to no avail.

When news of the demolition work came out many took to social media to voice their opposition to the move.

The site had been taken over by the government's international finance authority, SIFA, who planned to build a multi-story office building and hotel.

But a compromise may have been reached with an offer by the company who won the contract to demolish the building.

He said he had plans to relocate the building but was currently looking for land in town to do it.

"My dream is to rebuild a replica of the original building. I want to return it to its former glory."