Cyclone likely to form on Thursday, Fiji in path 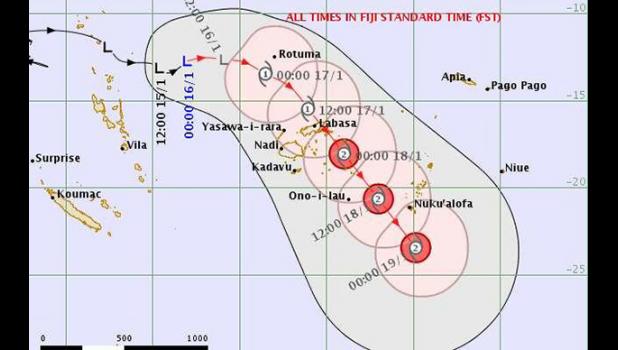 Nadi, FIJI — A tropical depression continues to strengthen as it moves towards Fiji, and is forecast to intensify into a cyclone tonight.

The system is forecast to swerve south of Rotuma tonight, before tracking close to a major town, Labasa, tomorrow as a category one or two cyclone.

The Fiji Meteorological Service says it's then likely to move close to Tonga's main islands as a category two over the weekend.

Heavy wind and rain warnings are now in force for much of Fiji, with coastal flooding also forecast for Rotuma.

AMERICAN SAMOA NOT IN THE PATH

National Weather Service Pago Pago forecast: Tropical Disturbance TD 04F (93P) about 1400 miles northwest of Tutuila is forecast to strengthen as it moves towards Fiji islands and further east-southeast.  As of now models are consistent in keeping the system to the south of the Samoan islands.  However we can anticipate rought seas and surf, increasing winds by Friday and an increase in potential for flash flooding and landslides from rain into the weekend.