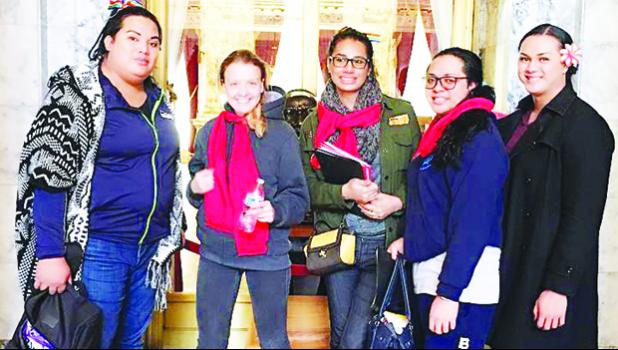 By
Joyetter Feagaimaali’i-Luamanu
joyetter@samoanews.com
These protests are necessary to voice the pain faced by these marginalized communities. They are necessary in holding the Government and policy-makers accountable," Isyss Honnen said.

American Samoan transgenders are making a public stand against discrimination — and were part of those lobbying in Washington state’s capitol against the transgender bathroom bill and the Lesbian, Gay, Bisexual, Transgender, and Queer/ Questioning discrimination bill that was introduced last week by the state’s current administration.

Responding to Samoa News questions, Isyss Honnen, from Pago Pago, and a board member of UTOPIA (United Territories of Pacific Islanders Alliance) said the fight for equality is far from over especially in light of the current Trump administration and the political climate. She told Samoa News via email that in 2016, there were six anti-trans bills introduced in Washington state and over 45 anti-trans bills have been introduced nationwide.

“All six were defeated in the Washington (state) Legislature. So far this year, two anti-Trans bills have been filed in Washington, with a total of 26 anti-Trans bills across the United States. According to the National Center for Transgender Equality, the 26 afore-mentioned bills vary in restricting transgender people’s access to healthcare, restrooms/ single-sex facilities, ability to update their identity documents, and also restricting their rights in schools. These bills also seek to override municipal and county-level anti-discrimination laws and allow discrimination against transgender people by creating special exceptions to existing laws,” Honnen told Samoa News.

She further explained that one of the two bills filed in Washington state — HB 1011 — seeks to amend Washington’s law against Discrimination (WLAD) by removing the ability of Transgender and Gender Non-conforming (GNC) individuals to use single-sex facilities according to their gender identity. The second bill, HB 1178, legalizes discrimination against Lesbian, Gay, Bisexual, Transgender, and Queer/Questioning (LGBTQ+) individuals.

“These bills are unconstitutional as they violate the human rights of my community and they promote a message of discrimination, hate, and exclusivity. Harmful legislation such as HB 1011 and 1178 will perpetuate a society that dehumanizes Trans* women of color. The National Coalition of Anti-Violence reported that 64% of LGBTQ+ hate crimes were against Trans* women of color.

“This alarming truth affects not only myself, but also my fa’afafine/Trans*+GNC brothers and sisters,” Honnen said.

She pointed out that during the early years of her transition, she experienced harassment; hate, crimes, violence, housing, employment, and racial discrimination due to her gender identity.

“These issues do still affect me to this day to some degree. With WA Anti-discrimination laws in place, my mind is somewhat at ease. However, it does not protect me from being discriminated against in airports and in other states.

“My efforts to protest were prompted by the fight for equality. We stand on the shoulders of many brave activists like Marsha P. Johnson and Sylvia Rivera, who were on the streets to protest for human rights. I am protesting for a future free from discrimination so that the path to transition for many young Trans* and GNC children is not riddled with the same difficulties I’ve experienced,” she said.

Samoa News asked Honnen about the experience; and she stated she’s an active member.

“These experiences are intersectional! We need to realize that we cannot mobilize and move forward as a society if there are people suffering from discrimination, oppression, and inequality.

“These protests are necessary to voice the pain faced by these marginalized communities. They are necessary in holding the Government and policy-makers accountable.

“My experience during these protests has been uplifting and unifying. It is there to remind me of the necessity to rise up and fight for equality,” she said.

Samoa News asked Honnen to comment on the forward progress of gay rights, with the Supreme Court ruling allowing gay marriage; and yet there are also these anti-LGBTQ bills introduced in 20 states, signaling a major setback.

She responded that these bills have increased in filings due to the political climate created by the Trump Administration.

“Vice President Pence is known for his long Anti-LGBT history. With him in office, we will continue to see these bills pop up annually. Personally, these bills push me to fight back with renewed ferocity. The fight for equality is never-ending,” Honnen said.

Honnen, who was born and raised in Pago Pago, is an accounting student residing permanently in Redmond, Washington state and she’s a volunteer and Board Member and Treasurer for UTOPIA- Seattle. She said UTOPIA is a non-profit organization that serves Pacific Islanders and the LGBTQ+ communities of Washington, and it has been involved in lobbying, direct action, organizing, and providing support and resources to the community.

“Our mission is to create a safe space for Pacific Islanders (PI) LGBTQI communities in advocating for social justice, education, and overall wellness.

“We have taken steps to provide support and sanctuary to our community members, many of whom routinely experience hate, harassment, abuse, and rejection. We also assist with providing access to services, benefits, and resources. Our partnerships with local organizations such as LGBTQ Allyship, Pride Foundation, and Gender Justice League has been instrumental in addressing issues such as LGBTQ discrimination, housing discrimination, homelessness, and Anti-Trans legislation that affect the members of the LGBTQ+ and Pacific Islander community,” she said.