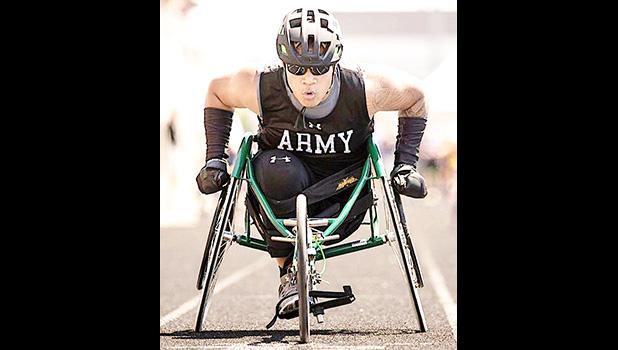 By
Blue Chen-Fruean
blue@samoanews.com
"Always have a positive attitude no matter what you are going through"

Jarred Vaina Tuvale is the true definition of a warrior. After being diagnosed with bone cancer last year, which resulted in his left leg being amputated, the 21-year-old from Laulii and Aoloau didn't waste time moping and feeling sorry for himself.

Instead, he opted to find a means of releasing his emotions and he found the answer in sports.

This past summer, Jarred participated in the Department of Defense (DOD) Warrior Games hosted in Chicago, Illinois. At the event, the former infantryman competed in various sports competitions, including sitting volleyball, cycling, shooting, track, and wheelchair basketball.

The DOD Warrior Games is an annual event that is open to wounded, ill, and injured service members and veterans in Palalympic-style sports including archery, cycling, field shooting, sitting volleyball, swimming, track, and wheelchair basketball.

"For as long as I can remember, my son has always been athletic," said Jarred's mother, Lole Tuvale, a nurse at the LBJ-TMC dialysis unit.

Lole and her husband Patrick Tuvale have 3 children — two girls and one son, Jarred.

Jarred and his sister Jayne made local news when they went off to basic military training together. Samoan siblings serving in the military is not uncommon, but having them go through boot camp together is.

Both signed up as US Army reservists. Jarred has medically retired while Jayne is serving in Hawai’i, where she also works and takes classes at Chaminade University. Their sister Patrina is a US Army veteran.

"We are just thankful that Jarred has been able to receive the treatment he needs and we are happy that he stays positive, always finding things to do, to stay active," said Lole.

According to her, when Jarred first enlisted in the US Army, he complained of pain in his leg. He underwent two biopsies locally and doctors told him everything was okay.

After boot camp, he again sought medical attention for his aching leg — this time, in Hawai’i — and was told nothing was wrong. It wasn't until he attended a training exercise in Louisiana that doctors found a tumor.

"They said he had cancer," Lole shared. Naturally, any parent who receives such devastating news would be heartbroken. And the Tuvales are no different. When the recommendation was made to amputate Jarred's left leg, Patrick and Lole put their emotions to the side and fought the uphill battle head-on with their only son.

The couple took turns caring for him during the rehabilitation stages, often traveling off island to be by Jarred's side in Texas, at Fort Sam Houston.

Throughout the ordeal, Jarred's family members and friends kept him in prayers as the once athletic boy was now down to one leg.

But Jarred's persistence and determination did not allow him to stay in bed long. He got his prosthetic leg and after physical therapy and months of recuperating, the free spirited soldier was back on his feet, doing what he loves most: playing sports.

"Always have a positive attitude, no matter what you are going through." These are Jarred's words of advice.

When highlights of Jarred's achievements at the 2017 DOD Warrior Games made national news, his parents — and the rest of his supporters — were ecstatic. The event brought in 265 athletes representing the Army, Marine Corps, Navy, Air Force, Coast Guard, the US Special Operations (SOCOM), as well as the United Kingdom Armed Forces, and the Australian Defense Force.

According the dodwarriorgames.com, the Warrior Games exist to provide an opportunity for athletes to grow physically, mentally, and spiritually from the sportsmanship and camaraderie gained by representing their respective service teams in a friendly and spirited competition.

"It is an opportunity for athletes to showcase their enduring warrior spirit in the presence of their families and a grateful nation."

Established in 2010, the Warrior Games is a "way to enhance the recovery and rehabilitation of wounded warriors and to expose them to adaptive sports."

Jarred is currently in the Aloha State, competing in sporting events sanctioned by the military.