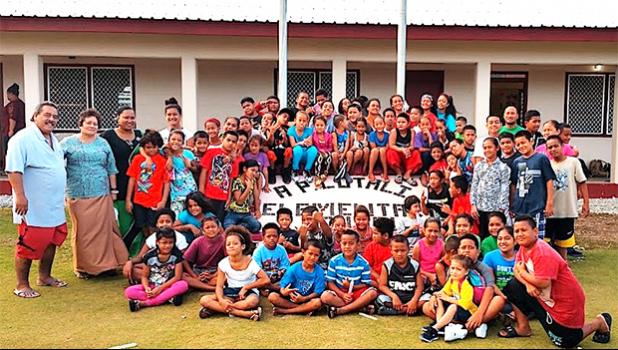 In New York for the 72 United Nations General Assembly meeting, Prime Minister Tuilaepa Sailele Malielegaoi on behalf of Samoa has endorsed the "Treaty on the prohibition of nuclear weapons".

“As a signatory to this historic treaty, we wanted to demonstrate unequivocally our aspiration to have a world without nuclear weapons,” the Samoan leader told the United Nations General Assembly in his address.

“The conventional narrative that the possession of nuclear weapons will act as deterrent to make the world a safer place to live, is not borne out by the current realities, otherwise the developments in the Korean peninsula would not have happened at all.”

“No matter the noble goal for having such arsenals, availing them to the wrong and unprincipled hands is a recipe for doom and mayhem, as people, after all, are human and mere mortals,” he continued.

“We cannot help but watch with trepidation and uneasiness the global dynamics nudging our world perilously close to a potential catastrophe of unimaginable proportions.

“As small island Pacific countries, we are no longer protected by our isolation - we are bystanders but with the greatest to lose in the unfolding power drama being played out in the Korean Peninsula.

“We pray for visionary leadership with sound moral judgment on both sides to ensure we give peace a chance.”

The Treaty – adopted on 7 July this year at a UN conference in New York by a vote of 122 in favor to one against (Netherlands), with one abstention (Singapore) – prohibits a full range of nuclear-weapon-related activities, such as undertaking to develop, test, produce, manufacture, acquire, possess or stockpile nuclear weapons or other nuclear explosive devices, as well as the use or threat of use of these weapons.

The Treaty will enter into force 90 days after it has been ratified by at least 50 countries.

The Fusion Center will be locally-centralized and will provide a mechanism where law enforcement, public safety, and private partners can come together to enhance our territory’s ability to safeguard our homeland and people, and prevent criminal activity within, at, and outside our island’s borders.

As the only U.S. territory without a fusion center, it is high time that American Samoa establishes a locally-operated and managed fusion center.  The Fusion Center will serve as the territorial hub with the federal government, through which to coordinate the sharing of intelligence and the gathering, processing, analysis, and dissemination of terrorism, criminal activity, and law enforcement information.

NEW YORK — September 21, 2017 —Addressing the 72nd annual general debate at the United Nations General Assembly, leaders from Pacific small Island developing states highlighted the growing impact of climate change on the lives of their people and called for concerted action to address the threat.

“As small island Pacific countries, we are no longer protected by our isolation,” said Tuilaepa Sailele Malielegaoi, the Prime Minister of Samoa, adding: “Climate change, like other global challenges, cross borders seamlessly. It has no respect for sovereignty and does not discriminate countries between rich or poor.”

“Its dire consequences are real including [for] those who remain in denial,” he underscored, urging global leaders to collectively prioritize the implementation of the Paris Agreement on climate change.

Also in his address, Prime Minister Malielegaoi, spoke of the importance of the 2030 Agenda and the Sustainable Development Goals (SDGs) and highlighted that, for small island development States, the 2014 ‘Samoa Pathway’ is their sustainable development roadmap which highlights their key tasks and priorities and links closely with the 2030 Agenda.

The Samoa leader also noted the escalating crisis in the Korean Peninsula and called for visionary leadership to ensure that peace is given a chance. Concluding his remarks, he also informed the General Assembly of the Summit of Leaders of discussions and outcomes at the Pacific Island Forum, which Samoa hosted earlier this year.

“I welcome these funds to help our educators in American Samoa as they develop reading skills in our students,” said Aumua Amata. “High literacy skills are essential for students as they look forward to graduating and pursuing their goals.”

Specifically, this grant of $250,447 from the U.S. Department of Education is designated for the American Samoa Department of Education under the Striving Readers Comprehensive Grant Program. This program was authorized by Congress to promote literacy skills for students from beginning school through their senior year of high school, and each state and territory then created their Comprehensive Literacy Plan.

“Encouraging the next generation of readers is important work,” continued Congresswoman Amata. “Congratulations to Dr. Ruth Matagi-Tofiga, along with Netini Sene, and everyone involved at the American Samoa Department of Education on obtaining this grant for literacy efforts.”