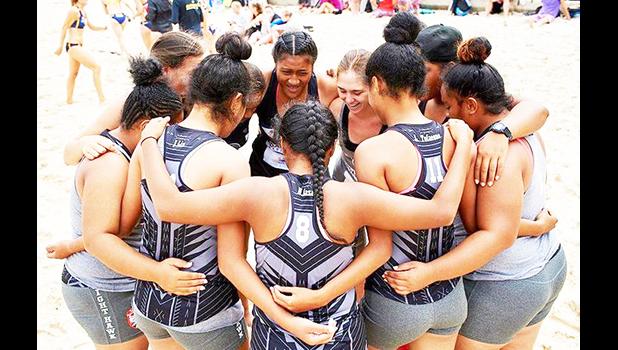 Buenos Aires, ARGENTINA — American Samoa has recorded the first victory by a Pacific Island team at the Youth Olympics in Buenos Aires.

The US territory's women's beach handball team beat Mauritius in straight sets, 13-7 25-8, in their third match of the competition.

However, they were unable to make it back to back wins, losing heavily to Russia in the next game.

It was a day of strong results for the Pacific region as Cook Islands swimmer Bede Aitu won his men's 50m backstroke heat in 28.90 seconds with Tonga's Finau Ohuafi a few hundredths of a second back in the three-person heat.

The 17-year-old Ohuafi backed that up only half an hour later with a seventh place finish in the third 50m freestyle heat in 25.54 seconds, while Daniel Ranis from the Marshall Islands was fifth in his heat in 29.21 seconds.

In other results in the Argentine capital, the Vanuatu men's hockey team scored their first goals of the tournament in a competitive 8-3 defeat against Mexico while the women's team were no match for India, going down 16-0.

Margie Winter from the Federated States of Micronesia was fifth of six competitors in her women's 50m butterfly heat in 32.40 seconds.

Chef de Mission Tomasi Tiko said Team Fiji had only three athletes competing in Argentina, down from 25 at the previous games four years ago.

"The other sports didn't qualify. We had rugby, hockey and a few other sports as well that were trying to qualify," he said.

"Unfortunately they didn't qualify so we were left with these three athletes to come over."

While Fiji only have a small delegation in Buenos Aires, it was still an exciting opportunity for athletes to compete on the world stage, Tiko said.

"Earlier in the year we had a young athletes' forum in Fiji where we helped the athletes develop a personal development plan to set five/ten year goals and this is one step in that direction in terms of helping them achieve their long-term goals," he said.

"Not only the performance on the field in gaining a bit of exposure but setting the benchmark in terms of where they're at with the rest of the competition in the world.

"For some of them it's the first time having this type of competition."