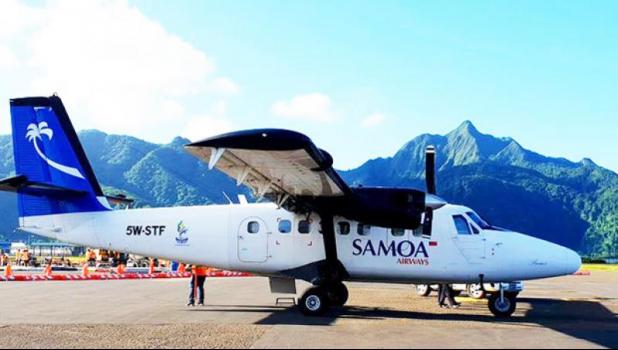 Specialized workers from off island will begin coming in Aug. 1
By
Fili Sagapolutele
fili@samoanews.com

Pago Pago, AMERICAN SAMOA — At Sunday’s cabinet meeting, Gov. Lolo Matalasi Moliga said the repatriation flights to bring back home local residents stranded in Samoa will run for this one last week and starting Aug. 1, for a period of two weeks, the flights will bring in specialized workers needed in the territory.

The governor explained that these are workers recruited “under specific provisions” to work on island saying that the government has about $200 million worth of projects to be addressed and there is not a sufficient workforce to carry it out.

Therefore, he said his decision along with that of the ASG Coronavirus Task Force is to open up this opportunity to recruit specialized workers from off island and this includes medical staff. He didn’t elaborate where the medical staff would be coming from.

While the governor did not give a number for recruited workers, he did say that the list of workers is being reviewed and will then be given to the Attorney General’s Office to start bringing in these individuals on Aug. 1.

The governor reiterated that the remaining local residents stranded in Apia would be brought in over this week, which is the last week of repatriation flights. Then starting Aug. 1 to Aug. 17th, ASG will be bringing in specialized workers.

He said instructions have been given to Health Department and LBJ Medical Center to use the two new government quarantine facilities behind the DoH Tafuna Community Health Center to house these workers as they undergo the 14-days quarantine requirement.

He said these facilities should be fully furnished with beds, but if there’s not enough beds, the workers should bring a mat to sleep on since they are not sick, but healthy workers.

Once all these workers are brought to American Samoa, the governor said the borders with Samoa would again be closed and if there is any other person wanting to return in the future, that would be a decision made between the governor and Samoa’s Prime Minister.

Regarding flights between Honolulu and Pago Pago that are now suspended through Aug. 31st, the governor again apologized to local residents stranded in the US, saying the goal is to protect American Samoa, as the number of cases in the US as well as Hawaii continues to increase.

As of 12-noon July 26th, Hawaii health authorities reported 64 new cases bringing the state’s total of 1,683 while the deaths stand at 26, according to the state’s health department website.

At the task force meeting, Lolo said American Samoa would continue on the current path with flight suspension between Honolulu and Pago Pago.

Also at the task force meeting, the governor announced a change to the task force membership, with the appointment of Tuimavave Tauapa'i Laupola as the acting chief procurement officer, filling the post left vacant after Dr. Oreta Crichton resigned more than a week ago to run for American Samoa Delegate to the US House.

Tuimavave back in May was moved by Lolo to work in the Governor’s Office handling several issues.