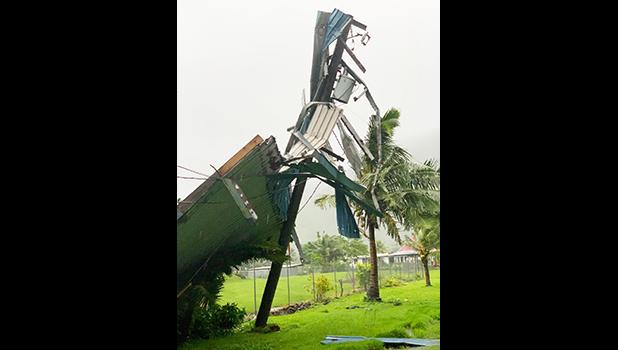 In the meantime, the Department of Education has announced that “Due to Weather Uncertainty and safety of our children ALL PUBLIC SCHOOLS — K to High School will be closed today, Tuesday Feb. 18 and Wednesday, Feb. 19.

Most private schools are also closed, while the government plans to conduct a full assessment throughout American Samoa once weather is permitted.

ALL School principals and vice principals please report to your respective schools, Elementary and Secondary Division please assist with our school assessment.

All other DOE Division please report to your division.

The two domestic airports in Manu’a islands remains closed while LBJ hospital is waiting for clearance to operate an emergency flight to uplift an serious ill patient from Ta’u island in Manu’a.

The Pago Pago International Airport is scheduled to re-open Tuesday afternoon after it was closed for two days due to several weather condition and Hawaiian Airlines flight from Honolulu last night is delayed until today, Tuesday, but arrival time is not confirmed yet.

The Port of Pago Pago reopened around 5p.m. yesterday allowing a container vessels to dock but the harbors in Manu’a remain closed.

With ASG vessels down for maintenance, Port Administration Department is chartering the Samoa government vessel MV Fotu-o-Samoa to carry supplies, equipment and other emergency needs for the Manu’a islands.

The vessel is arriving on Thursday and Gov. Lolo Matalasi Moliga has ordered two charters for Manu’a and to fuel for the island group, which has been without government ocean transport for sometime.

The American Samoa Power Authority has rushed to restore power outages at many location on the main island of Tutuila, while the Department of Public Works has dispatched crews to clear roads of land slides and fallen trees, blocking roads.

The governor has ordered Public Works to hired private contractors to handle any major problems while the department focuses on helping individual families who are in need.in Tafuna.