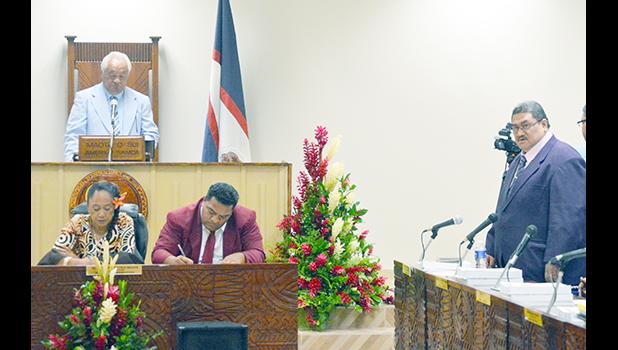 Pago Pago, AMERICAN SAMOA — Speaker of the House and the Vice Speaker engaged in a heated exchange of words over the issue of the dual role of a Senator during the House session last Thursday. They exchanged words while representatives (faipule) were listening in open session.

It started when Vice Speaker Fetu Fetui questioned the propriety of a senator performing legal work while he sits in the Senate at the same time. He was referring to Senator Togiola T. A Tulafono.

Fetu took the floor and posed the question to House Speaker Savali Talavou Ale asking if it was proper for Sen. Togiola to perform his work as an attorney while he is a senator.

He felt the question should be raised because it affects both chambers. Fetu said that performing the role of an attorney while at the same time serving as a senator is against the law. He felt that Togiola is violating the law.

According to the Vice Speaker he did not support Togiola being named as a member of the Territorial Bank of American Samoa (TBAS) Board of Directors.

He further stated a request to also appoint a House faipule to sit on the TBAS Board of Directors.

Savali quickly intervened and told Fetu that the nomination had been brought to the House for review so he didn’t understand why he was bringing up the matter now after faipule had already discussed the matter.

Fetu responded that he had asked at the time if a House member would be named to the board, but he never received a fair reply.

The vice speaker said having a House member would balance representation on the TBAS board. However, the way he sees this issue right now — it is as a violation of the law.

“What law is it you’re referring to that is violated?” Savali asked Fetu

Fetu replied, “The law where a senator is performing his duty as an attorney while serving as a senator at the same time.”

The speaker looked at Fetu and said he should look at the law and if there’s no law being violated with the dual role of the senator then there’s nothing to be concerned about. He also advised Fetu not to just stand up and voice what ever he wanted to say but carefully consider the issue if it’s relevant to discuss.

Fetu did not rest. He fought back and told the speaker that they’re  lawmakers and they must abide by the law.

Savali quickly brought the discussion to an end while the vice speaker was still standing asking for his opinion on whether it was proper for Togiola to actively engage in private legal work during his tenure as senator.

“If you don’t have anything else to say then let’s conclude this discussion,” Savali told Fetu.

Savali did not shake hands with Fetu after the House session as they usually do. He only shook hands with other faipule before he walked out of the House chamber.