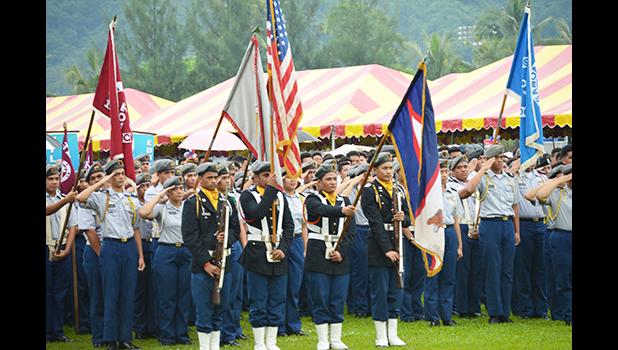 He said today’s “celebration is also an expression of our heart-felt and overwhelming gratitude to the United States of America for remaining faithful to its commitment to improving the lives of our people.”

He extend appreciation to VIPs and others from off island attending the celebration, including U.S. Interior Assistant Secretary for Insular and International Affairs, Doug Domenech, who delivered the keynote address and Samoa’s Head of State.

To Domenech, Lolo said, “your presence speaks volume of your commitment and that of the Trump Administration ensuring that the needs of the people of American Samoa are properly met.”

“To all our sons and daughters in the military, we enjoy today’s celebration and our freedom everyday, because of your unwavering commitment to defend and protect the freedom of our people and that of our great nation,” he said. “Thank you very much for your service and we always remember you in our prayers.”

The governor then publicly, thanked US President Donald Trump “for his rapid response to my request to declare American Samoa a major disaster area” in February following Tropical Storm Gita.

He said the Trump declaration “opened the flood gate for federal assistance which is helping our people rebuild their homes and restore their sense of security.”

He also acknowledged and recognized with great appreciation and gratitude the “awesome and splendid work” done by the US Federal Emergency Management Agency, US Small Business Administration, the Red Cross and all federal agencies “who are here to help our people.”

“Their demeanor and attitude in carrying out their duties have been wonderful, accommodating and compassionate. They really manifest the true spirit of public service,” Lolo said and expressed on behalf of the people of American Samoa “our gratefulness and sense of indebtedness with the manner with which you have helped restore normalcy to the lives of our people.”