Task force appointed to come up with ways to help StarKist 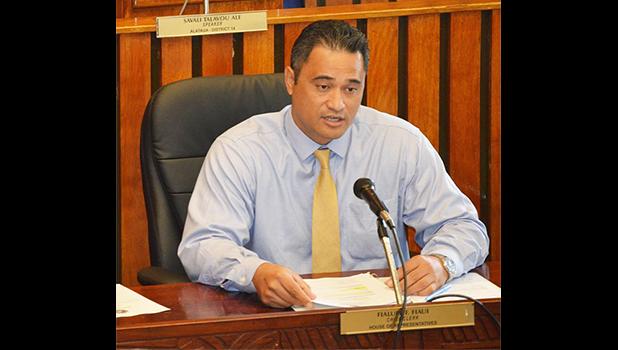 Pago Pago, AMERICAN SAMOA — An ASG task force, headed by Attorney General Talauega Eleasalo Ale, has been appointed to come up with recommendations to form a government proposal to the US Environmental Protection Agency (USEPA) to assist StarKist Samoa’s federal permit request.

In an Aug. 10th memo, Gov. Lolo Matalasi Moliga appointed an eight-member task force, charged with coming up with a proposal that needs to be completed and submitted to the Governor’s Office before Aug. 31st.

StartKist Co., president and chief executive officer Andrew Choe was on island early this month for a brief visit, meeting with the governor and other local officials. Choe has sought support on the permit application to the USEPA, “particularly on the operational refuse discharge which was dumped in the ocean but has been discontinued,” the governor’s executive assistant, Iulogologo Joseph Pereira told Samoa News at the time.

“It is unconscionable for us to sit idle while the fate of our territory is being deliberated by those who lack the sensitivity and clear understanding of the destructive effects to social, economic, and political landscape if StarKist elects to terminate its canning operations because of additional federal policies which will further erode and undermine its financial sustainability,” Lolo said in the memo appointing the ASG task force.

The governor said StarKist is facing substantial operating impediments and challenges predominately caused by federal policies. For example,  federal 30(A) Tax Credit has lapsed and there is no indication whether it will be reinstated.

Additionally, the next federally mandated minimum wage hike of 40 cents — which is effective Sept. 30, 2018 — will significantly add to StarKist operating costs. Furthermore, reduction of fishing grounds for fishing vessels and the cost of fishing permits imposed by independent countries of the Pacific to access their Exclusive Economic Zones is steadily rising.

"Insensitive enforcement of US Coast Guard rules and regulations effectively killed our secondary economy because fishing vessels are afraid to enter our port due to exorbitant fines and penalties,” he continued.

“Compliance with EPA environmental rules and regulations has materially raised operating costs for Starkist,” said Lolo, who noted that the task force will prepare ASG’s proposal that will be submitted directly to the USEPA boss, “requesting a period — to be determined and recommended by the task force — for a moratorium to accord time for StarKist to comply with whatever USEPA deems necessary.”