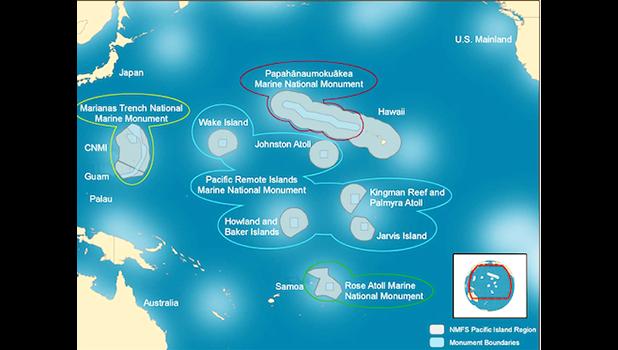 A retired US based scientist has voiced her strong opposition to any reduction of the National Marine Sanctuary of American Samoa (NMSAS), which includes the entire Rose Atoll Marine National Monument.

Ann Hobbs is among the more than 98,000 whose comments were released on the federal portal — www.regulations.gov — in response to a US Department of Commerce notice issued June 26th seeking public input regarding President Trump’s Apr. 28th executive order for the US Secretary of Commerce to conduct a review of national marine sanctuaries and marine national monuments designated or expanded since Apr. 28, 2007 throughout the nation.

Deadline to submit comments was July 26th but was later extended to Aug. 15th, according to federal records.

The Commerce Secretary’s review is separate from the Interior Secretary’s review, based on another Trump executive order, of land and ocean monuments going back to 1997. The US Secretary of Interior’s review is to be completed by the end of this week, with a report forwarded to the President thereafter.

During the past couple of days, hundreds of other comments dealing with the US Commerce Secretary’s review were publicly released, including one yesterday, from Hobbs who said she “strongly opposes the reduction of the National Marine Sanctuary of American Samoa.”

“As a retired scientist who enjoys nature and the outdoors, I believe it is essential that we preserve such areas as the National Marine Sanctuary of American Samoa as part of our heritage for our children and grandchildren to enjoy, and to preserve the resources protected by this Sanctuary for future generations,” Hobbs wrote. "The increased size of the sanctuary was supported by extensive scientific and stakeholder input.”

NMSAS protects many endemic species including corals, fish, shellfish, marine mammals, sea birds, water birds, land birds, insects and vegetation, according to Hobbs. “It is thought to support the greatest diversity of marine life in the National Marine Sanctuary System.”

Additionally, it’s “vital to continue to protect this important resource from despoilment and loss so that we may benefit from research carried out there, and hopefully future generations can continue to enjoy the same diversity of life that we do.”

Hobbs continued, “There is no valid reason to reduce the size of this monument or decrease its level of protection — certainly not for the mining of soon-to-be-exhausted fuel, if indeed it is there.”

The vast majority of those who submitted comments strongly oppose any reduction to marine sanctuaries including the NMSAS, and some even specifically pointed to the importance of the Rose Atoll Monument to many marine species and birds.

Rose Atoll monument “is one of the smallest atolls in the world, yet has hundreds of species of invertebrates and fish, and supports large populations of giant clams, which have been heavily exploited elsewhere in the Pacific,” wrote Douglas McCauley.

One of the many non-profit groups, who oppose changes to any of the current sanctuaries, included in their submission the National Marine Sanctuaries Socioeconomic Fact sheet, by the National Oceanic and Atmospheric Administration.

There is no publication date on the fact sheet, which notes that national marine sanctuaries are centers for strong local economies and have economic value reaching far beyond the water. It cites, as an example, that the “benefits of coral reefs to American Samoa residents and visitors are estimated to be worth around $5 million per year.”