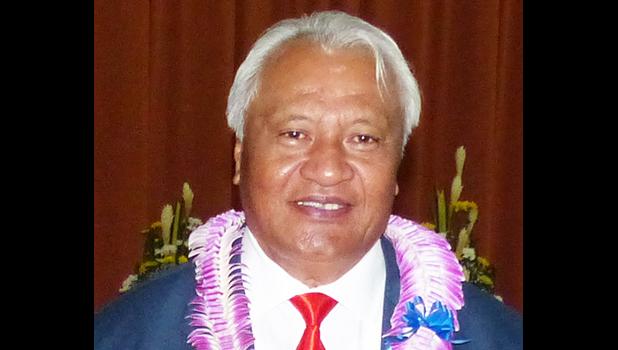 Fono is complying with the mandates of the constitution, he says
By
Fili Sagapolutele
fili@samoanews.com
To make clear, legislators are not resting on the laurels of hard work. We do not take this matter lightly and are equally concerned with its destructiveness, the Speaker wrote.

Pago Pago, AMERICAN SAMOA — Despite Gov. Lolo Matalasi Moliga’s assertion in his recent letter to House Speaker Savali Talavou Ale that “he made it a point to reach out to the Fono leaders” to address the declarations, Speaker Savali informed the governor that the House of Representatives had only been informed about the three amendments to the COVID-19 emergency declaration through “email alerts and news reports.”

“Surely, this does not adhere to the standard leadership protocols and cooperation you kindly reminded me,” wrote Savali in his May 21st letter responding to the governor’s May 13th letter which explained — among other things — the reason why cabinet directors didn’t attend House hearings as requested by committees. (See yesterday’s edition for details.)

According to the Speaker, the governor’s description of the current crisis “was unnecessary” as it may come as a surprise to the governor “but the challenges that the world endures is a matter we also monitor daily and we are well aware of the threat and dangers” the virus poses to the territory.

“To make clear, legislators are not resting on the laurels of hard work. We do not take this matter lightly and are equally concerned with its destructiveness,” the Speaker wrote.

As to the decision for the Fono to reconvene its session, Savali said it was done to comply with the mandates of the constitution.

By law, the Legislature must sit for 45-day sessions and with only 9 days left in the current session and less than 8-weeks to fulfill the required days “we decided to resume,” he explained.

“The decision to reopen was based on addressing needed appropriations of new funding we are to receive, as required by law,” he said, but didn’t specify the type of new funding — but Samoa News understands its federal funding relating to coronavirus.

He reminded the governor that budget statues prescribe that a budget-plan and appropriations, whether or not received annually and whether by grant or by other sources, must be presented to the legislature for its review.

“This time would have been the most opportune for this to happen,” he said. “We are alarmed and disappointed when you instructed witnesses not to attend hearings.”

(In a May 11th letter, Savali and Senate President Gaoteote Palaie Tofau informed the governor that the Fono is prepared to start a review and approval of the more than $80 million in COVID-19 funding allocated to American Samoa. See Samoa News edition May 15th.)

Savali noted the governor’s letter, which states in part about a message of solidarity to the public but then alludes that directors were unavailable because “your priority was to complete projects prior to leaving the political scene.”

Savali argued, “This will not be seen as a government working as a united front.” He further argued that “we cannot accept that you would rather a branch of government remain closed so that directors can focus on your preferred assignments.”

With no reported case of coronavirus, and the closure of all known ways it will enter the territory, “we felt safe enough to reopen and complete the less than two weeks of session remaining,” Savali explained.

“We also felt it proper to request the appearance of directors and other officials since they continue to go about their work day without any restrictions placed on their schedules, aside from prioritized projects,” he said.

The Speaker notes that the Fono practices social distancing and has limited the work schedules of employees to minimize all contact. And there is also a requirement for vulnerable employees to remain at home and work from home.

He said that during the meetings for the remaining days of session, the Fono would continue to operate with safe work environment, much like offices in other branches of government. And prior to each workday, staff disinfects the chambers and does a thorough cleaning.

“We require the wearing of face masks and hand sanitizing by everyone entering the chambers,” he explained. “We want to assure all witnesses that we have taken precautions to ensure their safety and at a level that we would feel comfortable to work under.”

Savali informed the governor that the Fono leaders have recessed the Fono and plan to reconvene June 8th. However, he said the recess does not preclude the House from holding hearings and the chairs of committees may call government witnesses to testify.

“I hope you permit their appearance,” he informed the governor. Savali’s letter is also copied to Senate President Gaoteote Palaie Tofau.