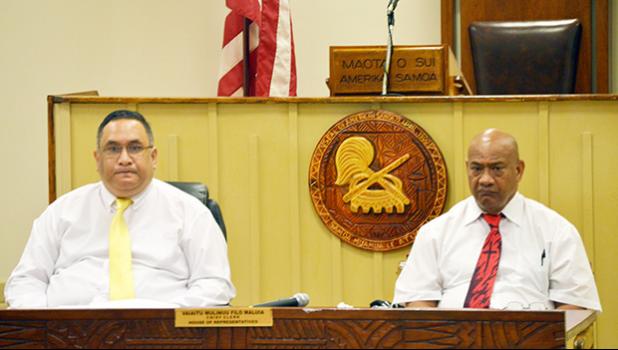 Pago Pago, AMERICAN SAMOA — Inmates who have completed their jail sentences and are sentenced to deportation to Samoa are to depart the territory on the Lady Naomi sailing of March 4th.

The hearing was in response to an inquiry by faipule Avagafono Vaimaga Maiava, a former deputy commissioner of public safety on what the government is doing to help return inmates who’ve completed their sentences and are facing deportation orders.

Avagafono said he was concerned the government may be liable if something happened at the Territorial Correctional Facility and the inmates, who are supposed to return to Samoa are harmed while awaiting ‘deportation’.

There are 6 men and one woman on the list of inmates whose travel documents are ready. Five others are having their travel papers processed.

Two inmates have been released after their IDs have been renewed. One is the child of a parent born in American Samoa and the other is a permanent resident.

According to the AG, they had planned on returning the first group to Samoa on tomorrow’s sailing of the Lady Naomi. However the CEO of the Prime Minister’s Office, Agafili Shem Leo had requested a delay while they contact the families of the inmates — and ASG has agreed to delay the inmates’ departure until March 4th.

The hearing was conducted by the House Legal Affairs/Judiciary Committee, with Committee Vice Chairman, Rep Vailoata Amituanai, chairing the hearing.

Vaifanuatele faipule Lavea Fatulegaee P. Mauga told the hearing that the issue about foreigners detained at the Territorial Correctional Facility (TCF) and wasting tax payers’ money to feed them while the government is not doing anything to return the back home is not a new issue.

Fagatogo faipule Vailiuama Steve Leasiolagi gave the opinion that this situation would not be happening if judges had not added deportation to sentences. He pointed out that the laws spell out sentences for each crime and deportation is not included. He believes the judges do not have authority to add punishment that is not included in the law.

Given the fact that the immigration status of some of these inmates had expired while in custody, Vailiuama questioned the reason why these inmates did not qualify under the government Amnesty Program.

Attorney General Ala’ilima Utu explained that it’s up to the defense attorneys to make it known to the judges that defendants have wives and children who are born here and try to convince the courts not to deport them.

He also said that the judges have the authority to impose deportation and this is usually for felony convictions.

Ala’ilima Utu said the defense attorney’s role during sentencing is to give the court all information about the defendant[s] such as his family, his wife, the numbers of children, his employment, how long the defendant has lived in the territory, etc. This sort of information will help the court consider a suitable sentencing for the person who is convicted for a felony crime.

Speaking about foreigners entering the territory, the attorney general said to remember that coming into American Samoa is not an opportunity, it’s a privilege.

Acting DPS Commissioner Fo’ifua echoed the AG’s comments that the defense attorneys should explain the personal circumstances of defendants to the judges.

Fo’ifua made it clear to faipule that court sentences for people violating the territory’s laws send a real message that “we mean business in the territory, so don’t come over here and violate our laws.”

Manu’a #1 Faipule, Alumamalu Filoiali’i Ale said that any person who enters the territory must remember that it’s a privilege to be in American Samoa, however, anyone who violates the law of the land must face the consequences of their actions.

Faipule Avagafono who requested the hearing said he was pleased to hear that the government is helping the inmates return to Samoa after completing their sentences.