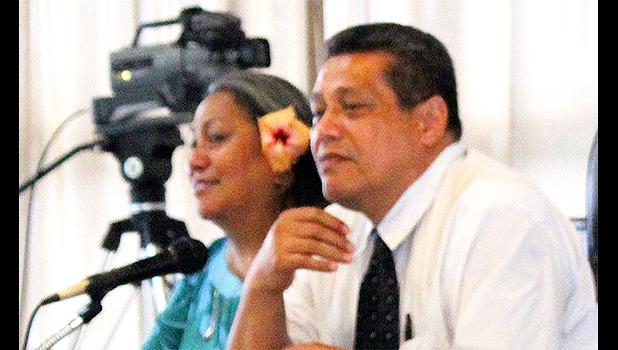 Pago Pago, AMERICAN SAMOA — Chemical castration treatment for sex offenders,  “is not [a] 100%” sure thing for cure, says LBJ Medical Center’s chief of internal medical, Dr. Seakerise Tuato’o, while Sen. Tauaa S. Vaouli points out that something needs to be done to address the rising number of sex assault cases, especially for victims, who are children — in need of protection from predators.

These are some of the statements made during a Senate committee hearing yesterday on Sen. Taua’a’s bill requiring chemical castration for convicted sex offenders. ASG witnesses called — for the second hearing on the measure — were Dr. Tuato’o and head of LBJ pharmacy, Dr. Evelyn Ahhing-Faaiuaso.

Responding to the first round of questions from Sen. Tuaolo Manaia Fruean, who chaired the hearing, Tuato’o acknowledged that a few states have similar laws on chemical castration but such “treatment is not 100%” cure.

Both Tuato’o and Fa’aiuaso concurred with a provision of the bill, which states that the convicted sex offender would go through screening to determine their suitability for hormone or anti-androgen treatment.

Another important step, they said, which is outlined in the bill, is that the person — as part of the screening process — undergoes medical evaluation and a psychological or psychiatric evaluation.

Fa’aiuaso brought with her to the hearing, “medroxyprogestrerone acetate”, which is currently used at LBJ for treatment of female patients and this is the same drug the bill says is to be used for chemical castration. The drug is also a contraceptive.

She recalled her testimony at last month’s committee hearing, that this drug reduces a person’s sexual desire, and this is just one of the US Food and Drug Administration approved drugs for such purpose.

(Samoa News notes that none of the senators requested to have the bottle taken out of the box for a close inspection.)

Fa’aiuaso explained that the current cost of a treatment using this drug, for women, as it is used now at LBJ is $400 a month. She noted that the cost for chemical castration treatment is not known at this time, since it's not currently carried out at the hospital.

Tuaolo inquired on the age a person reaches their sexual peak, to which Fa’aiuaso responded that a qualified answer should come from an expert in the field. However, she noted that it’s the person who has “power to control” his/her actions and desires.

Tuato’o agreed, saying that while each individual has desires, it’s the “person who controls” such matters. He reiterated that the drug used for chemical castration reduces a  person’s desires but — again “it’s not 100%”.

There were concerns over the side effects of such treatments, raised by the committee, and the witnesses suggested additional research by the bill’s sponsor or even the Senate into the “advantage and disadvantage” of such treatment.

Taua’a was asked by Tuaolo to explain to the committee the reason for introducing this measure, as he was not at the first hearing.

The senator explained that between 2017 and 2018 there were about 100 sex assault cases, and those numbers have continued to increase from November 2018 into the beginning of 2019. He noted that the media has also reported recently more assault cases including those involving children. He pointed out with concern, a case where a man is charged with sexually assaulting his biological daughter.

Tauaa said he has six daughters and six granddaughters and he wants to ensure they are protected from these types of incidents, which he said are “spreading like wildfire”.

He asked senators for their support on the bill, saying current law is not stopping predators. “There needs to be a way to address this growing problem,” he said.

At the end of the one-hour hearing, Tuaolo said the committee will continue to discuss the measure, and look at possible amendments, if necessary, before making a final decision.

Tuaolo asked if there is medication or drugs at LBJ for treatment of “candida auris” which is spreading across the US as reported on national television.

Fa’aiuaso explained that this is a “bacteria”, and considered a “superbug” and American Samoa has its own type of bacteria. She said there is a drug for treatment of this superbug at LBJ.

According to the US Center for Disease Control and Prevention (CDC), Candida auris (or C. auris) — an emerging fungus that presents a serious global health threat — causes severe illness in hospitalized patients in several countries, including the United States. Additionally, patients can remain colonized with C. auris for a long time and C. auris can persist on surfaces in healthcare environments. This can result in spread of C. auris between patients in healthcare facilities.

CDC said that most C. auris cases in the U.S. have been detected in the New York City area, New Jersey, and the Chicago area. And strains of C. auris in the United States have been linked to other parts of the world.

CDC online public records show a total of 587 confirmed clinical cases of Candida auris reported by US states as of Feb. 28th from 12 states with New York having a high number of cases at 309.